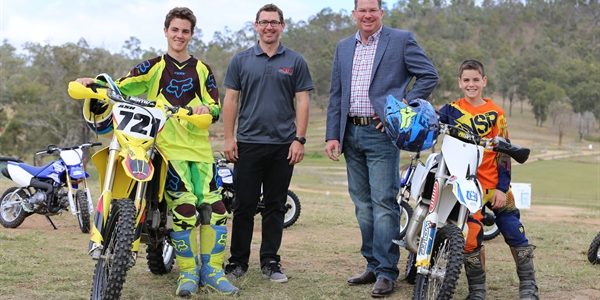 MOTO enthusiasts are revving up for an even more family-friendly experience at the Queensland Moto Park after Motorcycling Queensland secured Commonwealth funding to build a ropes course and jungle gym.

The $38,638 project, which Motorcycling Queensland will chip in half for, is expected to attract more young families to the facility at Coulson.

Queensland Moto Park manager Ray Buchanan said it was an exciting time for the moto sports community, with hopes the new play gear would be installed in time for Christmas alongside a new canteen.

Federal Member for Wright Scott Buchholz said playground project, which will be achieved through a $19,319 Stronger Communities Program grant, was a plus for families and the local economy.

“This Motorcycling Queensland facility is already such an asset to the region, attracting up to 50,000 people annually, and now it’s going to become even more desirable for families with kids,” he said.

“The great thing about those tens of thousands of visitors coming to our region each year is many of them stop at the local servo for fuel and they grab a bite to eat on their way through, so there can be some really positive flow-on effects for the broader community.

“I congratulate Ray and the team at the Queensland Moto Park and Motorcycling Queensland for their success in securing this funding and I’m glad to be part of a government which supports these community-building projects.”

“This play equipment, as well as the new canteen we’re constructing, will just make it so much more family friendly because riding has to stop at 4pm and this will give people a reason to hang around,” he said.

“The idea is to encourage families to camp out and make the most of the activities they can do near their campsite after a day of riding.”

Jimboomba rider Joshua Kennedy, 10, said he was looking forward to making use of the playground.

“This’ll be great for all of us – at the end of the day when we’re done we’ll have something to do and a place to just hang out with our friends,” he said.