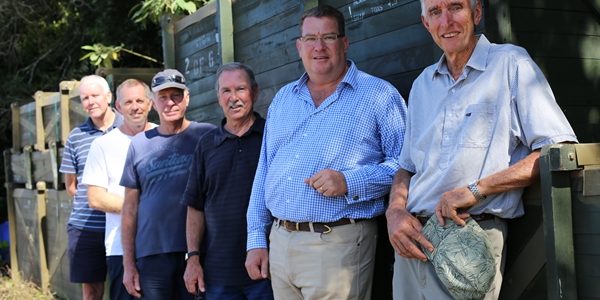 THE Springbrook Men’s Shed is one step closer to becoming a reality after the group secured a Commonwealth grant to install bathroom facilities.

Federal Member for Wright Scott Buchholz said Commonwealth funding for the $10,000 bathroom project – which the group will pitch in $50000 towards – was key to getting building approval.

The shed will be built on Gold Coast City Council land on Springbrook Road near the Springbrook community hall and SES shed, with works under way to lay the foundation slab.

The structure itself will be a repurposed 1965 galvanised steel shed which was originally destined for Vietnam but has been in storage at the Wallangarra Army Depot for 50 years.

Springbrook Men’s Shed president Jim Darke said the group could not have progressed towards its dream of setting up a local Men’s Shed without the means to build a bathroom.

“This thing has been a long time in the making – the concept was born three years ago and we’ve got 21 members now who are keen to get moving on creating our shed,” he said.

“The toilet has to go in at the same time as the shed – it’s a requirement – so this grant was absolutely instrumental in getting this project going, otherwise we couldn’t have got a building approval.”

“In our community up there are retirees, Vietnam Veterans and people who just really need something like this to bring them together with other people in a place where they can talk openly about themselves, talk about their problems and share their skills,” he said.

“The Springbrook Men’s Shed is going to make such a difference to the people of Springbrook and I’m so glad the federal government, with my advocacy, could chip in to help make it a reality,” he said.

“I commend Jim Darke and his team for their tireless work in getting this project off the ground and I cannot wait to see the finished product.”