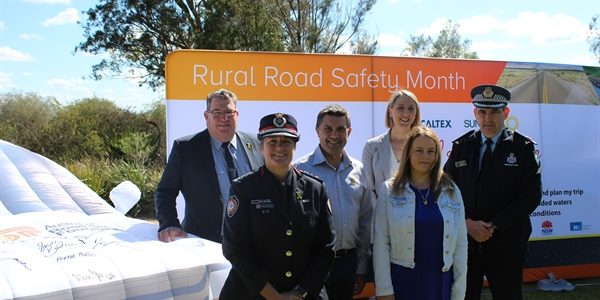 ARSF launched the Rural Road Safety Month in 2018 as a new initiative specifically aimed at reducing the rural road toll. This followed research that showed in 2018, 700 people died on rural roads despite only making up 16.5 per cent of the nation’s population.

“For the first time the Australian Government has a long-term infrastructure plan, including a ten year infrastructure vision with a pipeline of investment worth $100 billion.

“Earlier this year we opened the Office of Road Safety to provide greater leadership and coordination of road safety efforts at a national level, putting road safety at the forefront of our transport infrastructure investment program,” Scott Buchholz said.

Scott Buchholz said the Government has an unwavering commitment to regional Australia and part of that commitment included addressing the rural road toll.

“We’re making a targeted investment through the Black Spot Program to address high risk areas, with a significant emphasis on improving roads to get people home sooner and safer.

“As part of the $2.2 billion boost to Road Safety announced in the 2019-20 budget, the Morrison Government has committed an additional $50 million per year from 2019-20 to the Black Spot Program.

“While we will continue to invest in safer roads, there is always more to be done and driver awareness and behaviour is a big component in road safety.

“I encourage everyone to make the pledge to Choose Road Safety and support the month through hosting local events or sharing road safety information among staff, students, colleagues, family and friends,” Scott Buchholz said.

BACKGROUND:
• Rural road crashes account for 65% of the Australian road toll despite only accounting for 16.5 per cent of the population.
• The rate of serious road-related injury among residents in rural areas is nearly twice that of those in major cities