Wongaburra Mens Cave Down Under gets $7500 boost 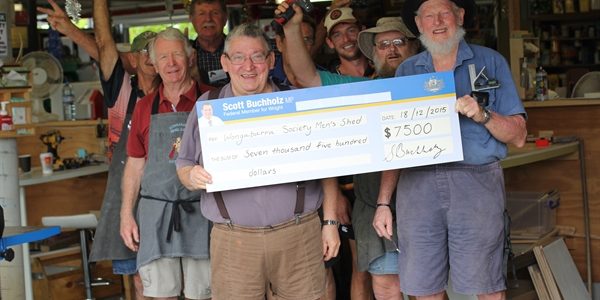 MEN at Beaudesert’s Wongaburra Men’s Cave Down Under will be able to combine working in the shed with getting outdoors through a new federally funded awning.

Wright MP Scott Buchholz announced the approval of a $7500 grant for the awning under round 11 of the National Shed Development Program on Friday.

Mr Buchholz said the addition of a sheltered outdoor area would boost the workshop experience.

“The Men’s Cave Down Under is a place where men can work on meaningful projects in a friendly and inclusive environment, and this new addition is certainly going to build on that,” he said.

“Getting this new awning will mean the men get to work on these projects with the added benefit of being outdoors and enjoying the picturesque scenery the electorate of Wright has to offer.”

The 11m x 11m awning, which is expected to be constructed in early 2016 pending council approvals, will nearly double the facility’s floor space.

About 20 men including Wongaburra residents and community members from across Beaudesert and north to Cedar Vale use the facility each Monday, Wednesday and Friday.

“This is just awesome because it’s going to top off all the progress we’ve been able to make here since we started as a tiny 3m x 5m workshop in a car port,” said Mrs Laulau.

“At the moment we have to set up temporary gazebos but now the shade and shelter will be permanent and residents will be able to actually come out, look at the view and not get burnt.”

The Australian Men’s Shed Association, which administers the program, will open a new round of funding in early 2016.

For more information visit www.mensshed.org/home/.aspx or phone the Wright electorate office on 5541 0150.