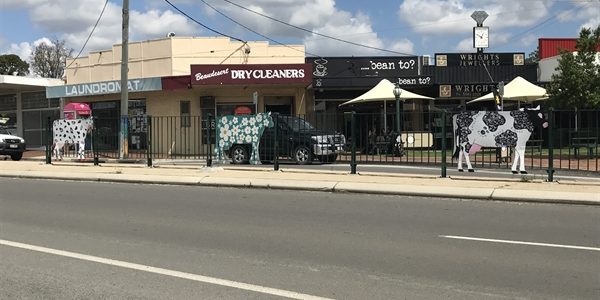 Mr BUCHHOLZ (Wright) (16:29): I rise today to highlight the plight of the Australian dairy industry and in particular the dairy industry in Queensland, and South-East Queensland, which is doing it incredibly tough at the moment. I also rise to put my support behind Beaudesert, which was recently announced as the 2017 Legendairy Capital of the subtropical region and is now in the running to take out the award for National Legendairy Capital.

Beaudesert, set in the rolling hills of the Scenic Rim, boasts around 34 dairies, eight per cent of Queensland's total. Well, there were 34 when we wrote this speech; a couple of them have probably fallen over by now. Those farmers are punching well above their weight, producing 47 million litres per year, or just over 11 per cent of the state's production. Beaudesert dairy farmers have often had to deal with the cruel inflictions of Mother Nature. Earlier this year, Scenic Rim farmers had to deal with massive crop losses and fences being washed away in the aftermath of Tropical Cyclone Debbie. These extreme events have happened before and will happen again, but, with the worst of Mother Nature, comes the best of human nature. The resilience of local farmers and the support of the local community meant that they were quickly back on their feet, but they still wear the financial scars. It's always been that way around Beaudesert. It's a great community, and we got in behind and helped our farmers.

These characteristics are personified by the Daughters of Dairy Farmers group. Founders Rachel Rohan, Joanne Mollinger and Lisa Harrison aim to educate and encourage consumers to buy branded milk and to break down the stereotypes through social media. Helped by a $2,500 thousand grant through the Dairy Australia Legendairy Capital program, the group helped distribute life-size cut-out cows around town to local businesses and schools, for decoration. The group held a Legendairy event to launch the artwork, which can now be seen, along with cattle pads, all around our town. It's a moving reminder of the struggles that our dairy farmers are facing.

There's an ACCC report coming down to give its findings on the dairy industry, following a Senate report into the dairy industry. You don't have to get too far into a chat with people in our dairy industry to find that they lay the blame for their financial demise solely on $1 a litre milk. I commend the Legendairy Capital work, but I encourage retailers to abandon their $1 a litre milk campaign, which is crippling the industry. Day by day, I'm losing dairy farmers because they are being asked to produce milk below their production cost. If Australians would just show their compassion to the dairy farmers, as my community shows compassion to the dairy farmers, we could maybe save some farmers and save the industry.