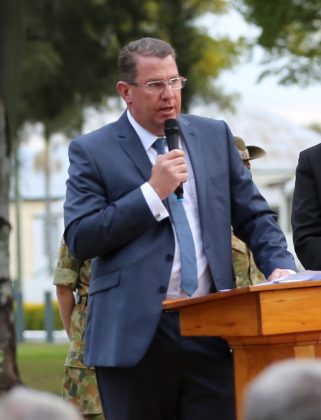 Scott believes that he shouldn’t ask any of his staff to do a shift or job he hasn’t done himself. It is a leadership mantra which served him well in his 25 years in the transport industry in Queensland. Until recently, Scott was a Director of CQX and Toowoomba Express Couriers. Both businesses were on forwarders to regional Queensland for companies such as Wards Skyroads, Mayne Nickless, Comet, TNT, and Toll Express.

Prior to starting his own businesses, Scott’s interest in economics stemmed from his time in the finance industry with Australian Guarantee Limited (AGC) where he got his start in the Credit Department. From there he expanded his Commercial and Agri-Finance skill sets, working with rural businesses across Queensland.

Real life experience underpins Scott’s empathy with and understanding of small business and regional Australians who endure the complex challenges of harsh drought and increasing input and production costs. Scott understands a strong economy is central to everything. It’s central to delivering vital services, lowering taxes and providing a safety net for those who need it.  As a previous small business owner, Scott knows the value of money and understands the need to make good financial decisions without waste.

Scott’s business background means he is a staunch advocate for small businesses. He founded the Parliamentary Friends of Small Business in this spirit, to give small business issues a higher priority and a strong voice in Australia’s Parliament.

Scott has previously served as the Chairman of the Joint Standing Public Works Committee (PWC) which has appropriated approximately $5 billion on Australian Government buildings and infrastructure both in Australia and our foreign embassies. The PWC considers several factors in its scrutiny including purpose and necessity for the work, effective expenditure of funding, details of revenue, and present and future value of projects.