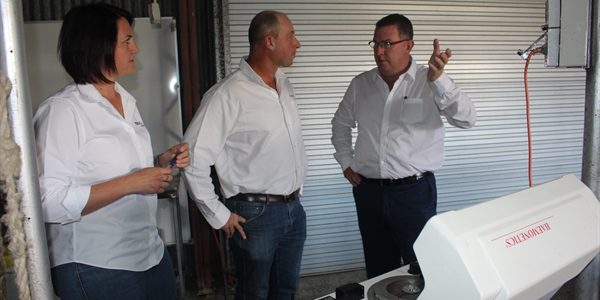 Mr BUCHHOLZ (Wright) (11:31): I thank the Federation Chamber for its indulgence in allowing me to pass on these few comments. I would not detain the House any longer than I have to if I did not think the matter was of global importance. In my electorate we have a small company by the name of Plasvacc, who busily go about making vaccines for parvovirus for dogs and snake antivenene for humans. They have been working very diligently with the CSIRO and the University of Queensland. They have completed some preliminary primate trials and have discovered a cure for the deadly virus Ebola. We will be working now collectively with the World Health Organization to assist with some funding in this space. Last year, when we had the last Ebola outbreak, 11,000 people in Africa passed away from this deadly and debilitating disease.

Plasvacc is a very humble business, a very unassuming business, nestled in a vet clinic on the side of the Cunningham Highway. The team are amazing operators when you see what they do. Last week I had the pleasure of touring their facility. It is a local company which traditionally manufactures high-quality blood plasma products using veterinary and medical products.

In 2014 Plasvacc were approached to be part of an international team led by professors Khromykh and Suhrbier from the University of Queensland, and QIMR Berghofer Medical Research Institute, with the project also involving scientists and doctors from the CSIRO, INSERM, VECTOR in Russia, where they conducted the primate trials, Claude Bernard University in France and the United Nations Medical Service in New York. The clinical papers have been peer reviewed and accepted by the medical fraternity.

Scientists around the world have been working in this area for many years. I acknowledge their expertise and hard work in this area. Plasvacc's head vet, Shane Bedford, and his horses played a small but vital role in turning this theory into reality. They take plasma out of horses and, in a nutshell, they deconstruct the DNA of Ebola, they take out a couple of components, they put it into a horse, the horse builds natural antibodies and they then pull the plasma out, spin that off, and that then becomes the antivenene that they use in their trials.

I will keep the House informed on this ground-breaking advance from a great local team in my area.