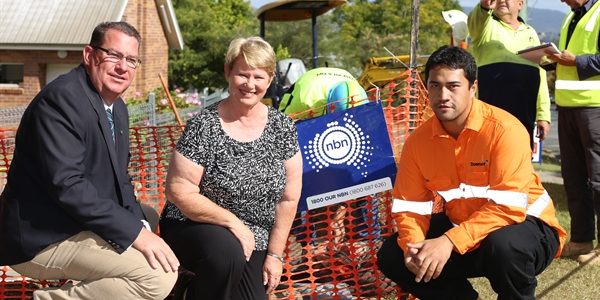 THOUSANDS of Beaudesert homes and businesses are set to be connected to the National Broadband Network (NBN), with fixed line construction under way to more than 4000 premises in the town.

Anticipation is building for faster internet locally, with the service expected to be ready for connection by the end of the year.

“This continued roll-out of the NBN in Beaudesert will come as a relief to many households and businesses in Beaudesert who rely heavily on fast internet for their work, their education and their day to day life,” he said.

“This is an issue I have championed since before the last election and my advocacy is paying off – this electorate was not even on the 10-year NBN planning map previously but now we have thousands of homes and businesses set to benefit in Beaudesert alone.”

In addition, construction is under way to connect 5200 premises through fibre to the node technology at Cedar Grove, Cedar Vale, Jimboomba, Mundoolun and South Maclean.

Beaudesert businesswoman Noela Lee, a partner at Trilogy Accounting Group, said the NBN was a major boost for local operators.

“We’ve become totally reliant on the internet to do our work, particularly since we got rid of our desk server and went to a local secure cloud service, so the NBN will mean quicker, faster and more reliable access for us,” she said.

“Access to fast broadband is designed to provide a range of benefits for homes and businesses such as improved opportunities to work from home, better access to online education tools and more options for on-demand entertainment,” she said.

“Whole families will be able to be online at the same time, using multiple devices and all enjoying the same fast speeds.

“And for businesses, be it e-commerce, sending and receiving files, accessing online services, internet and data security, cloud based sharing or communicating with staff and customers, all aspects will be faster and more efficient with the NBN network.”

To view a map of the NBN roll-out visit http://www.nbnco.com.au/maps