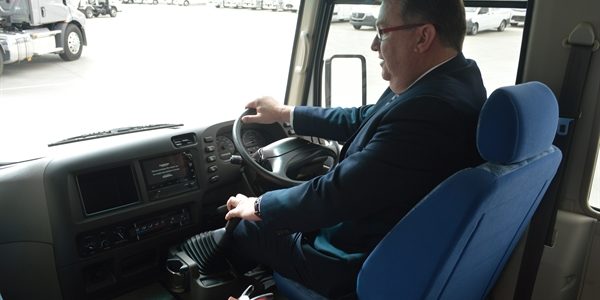 Assistant Minister for Road Safety and Freight Transport, Scott Buchholz, has hit the road in Melbourne as he continues to engage with the transport industry following this year’s election.

The Assistant Minister visited the Iveco manufacturing plant at Dandenong and then took the new Mercedes Benz Actros for a test drive through the streets of Laverton during a tour of the Daimler Trucks depot.

Mr Buchholz had over two decades experience in the transport industry before entering parliament and still holds a heavy vehicle driver’s licence.

“It was a great opportunity to get back behind the wheel and test drive one of the most modern trucks available in Australia,” Mr Buchholz said.

“The technological advancements, particularly in safety, have been staggering since my involvement in the industry just a few years ago.

“Mercedes Benz “Mirrocam” is a major safety advancement and can be a game changer in helping drivers with blind spots around heavy vehicles,” Mr Buchholz said.

“The tour of the Iveco plant also provided some important insights into the industry.

“Iveco has a long and proud history in Australia based at Dandenong and it was good to see the company taking important investment steps to continue its presence,” Mr Buchholz said.

Mr Buchholz was in Melbourne for the Transport Infrastructure Council meeting of commonwealth, state and territory transport ministers.

“It’s important that we hear directly from industry representatives before meetings like this so that their issues and concerns are taken into account in any policy decisions,” Mr Buchholz said.

“While in Victoria, I was also able to visit the Australian Road Research Board (ARRB) at Port Melbourne which is a significant contributor to research in this important area.”