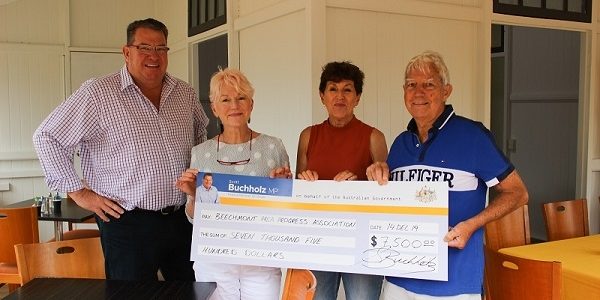 Federal Member for Wright, Scott Buchholz has joined members of the Beechmont Area Progress Association (BAPA) to announce $7,500 in funding under the Stronger Communities programme.

“I recently visited beautiful Beechmont, met with Cr West and members of the BAPA. I’ve heard from many residents and especially businesses in this corridor, from Canungra, through to Beechmont and further south.

“During the fires, Beechmont was devastated and the impacts are still evident. Not only is the area still recovering emotionally, but now economically with a reduction in visitors to the area. The local economy relies on tourists and those coming in, buying local goods, staying in local accommodation and bringing the dollars that come with that.

“While the area has been adversely impacted, it is beautiful, it is stunning and it is open for business. You have wonderful places to see, lovely cafes such as Headmasters to grab a bite to eat or drink and of course – the most relaxing surrounds in which to relax,” Mr Buchholz said.

Scenic Rim Regional Councillor, Virginia West thanked Scott Buchholz for the funding and said it has been an ongoing challenge for a number of locals to access the building.

“I thank Scott and the Federal Government for presenting this funding. It has always been a challenge for a number of people in the community getting up into the building, on those rather steep stairs.

“They would like to attend the yoga, craft groups and other events that happen here.

“I also thank Afra, she did the application in the middle of the fires, with no internet and after being evacuated herself,” Cr West said.

BAPA Vice President, Maurice Hansel welcomed the funding and said the ramp is needed at the public building where the BPA is situated.

“The ramp is really needed, we have some old people that have trouble going up the stairs.

“This used to be the old school, we’re building it up so the community can gather here.

“We have markets every third Sunday of the month, Beechmont Area markets. We’re always looking for stall holders and we just want people to come back and enjoy it.”

The Stronger Communities Programme supports the Australian Government’s commitment to deliver social benefits in communities across Australia. Round 5 of the program will provide $22.65 million to fund small capital projects in each of the 151 federal electorates.

“During the fires, the stronger communities programme closed – but with some joint lobbying by Cr West, we managed to get BAPA’s application through. The area will now receive $7,500 for a community building project”, Mr Buchholz said.

The Federal and State Governments recently announced a tourism recovery package for Southern Queensland, to help tourism communities get back on their feet sooner.