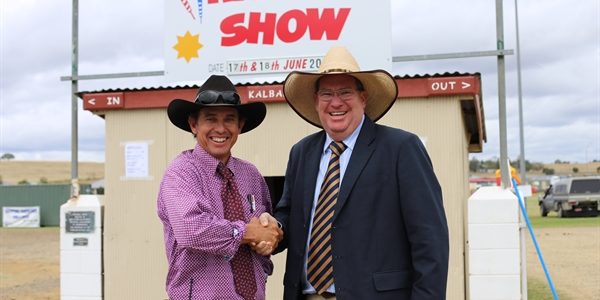 THE Fassifern will benefit from a re-elected Turnbull Coalition Government after Federal Member for Wright Scott Buchholz pledged $250,000 for the popular Kalbar Showgrounds.

Mr Buchholz announced the boost for the showgrounds when he opened the 87th annual Kalbar Show on Saturday, June 18.

Mr Buchholz said the funding would benefit not only show-goers but the whole community and the local economy.

“The Kalbar Showgrounds are more than a site for our beloved annual show – they are the home of the local Fassifern Falcons AFL club, a meeting place for community groups and a venue for functions,” he said.

“Beyond that, the Kalbar Showgrounds are a welcome place for travellers to rest their weary heads – a place they can park their caravan or pitch their tent and then head into town to support our local businesses and dine at our local eateries.”

He said the funding would give the Kalbar Show Society the boost it needed to keep its facilities in good condition.

“Neil Goetsch and his team at the Kalbar Show Society continue to do an amazing job of keeping the infrastructure at the showgrounds in good order but their site is in high demand by locals and travellers alike and it’s a huge job to maintain it all,” he said.

“I’m proud to be part of this Turnbull Coalition Government which recognises the value of regional Queensland and, with my local advocacy, will give our local Kalbar Show Society this much-needed boost.”