Bridge completions another step on the road to recovery 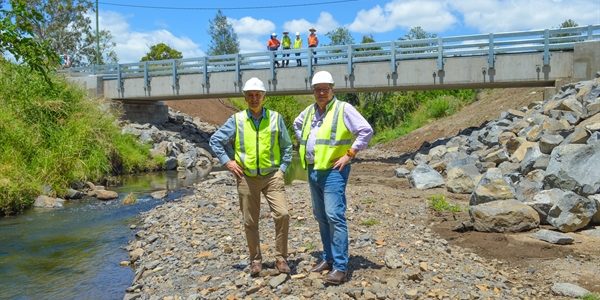 The completion of Haack Bridge at Lamington and Steinhardt Bridge at Darlington is a significant milestone in the Scenic Rim Region Council's road to recovery to repair damage from Severe Tropical Cyclone (STC) Debbie in April 2017.

Assistant Minister for Roads and Transport, and Federal MP for Wright Scott Buchholz said the reconstruction works were jointly funded by the Commonwealth and State Governments through the Natural Disaster Relief and Recovery Arrangements (NDRRA).

“STC Debbie tracked a path of destruction from North Queensland down the to the New South Wales border,” Mr Buchholz said.

“Our local region was one of the most heavily impacted councils in Queensland with a local infrastructure reconstruction program of approximately $62 million.

“The Morrison Coalition Government is pleased to be able to provide assistance to help the community get back on its feet and the completion of Haack Bridge and Steinhardt Bridge is a significant step for Scenic Rim Regional Council.”

Minister for State Development, Manufacturing, Infrastructure and Planning Cameron Dick said Scenic Rim should be commended for its recovery progress.

“STC Debbie damaged road and bridge infrastructure across the state, as well as interrupted businesses, disrupted families and closed schools and this was definitely the case in Scenic Rim.

“Reconnecting communities is vitally important to ensure life gets back to normal and having Haack Bridge and Steinhardt Bridge reconstructed is a strong sign of the recovery in the region.”

“We replaced both timber bridges with strengthened concrete designs as well as improving the alignment and approach to each bridge,” Cr Christensen said.

“This was at a total cost of $3.38 million, which was made up of $3.25 million Commonwealth and Queensland funding and a $126,750 contribution from Council.

“These bridges now have greater capacity for heavy loads and are better able to support the transport of stock, produce and equipment through our rural communities, which would not have been possible without Commonwealth and Queensland support.

“While Haack and Steinhardt Bridges have been completed, reconstruction and upgrade work will continue across the region.

“Council will be upgrading the Jerome Bridge on Upper Coomera Road and the new Bennett Bridge, replacing Bennett Crossing on Illinbah Road, to a standard more resilient to future flooding thanks to funding through the NDRRA Betterment Fund.

“In addition, as part of the single biggest construction project ever undertaken by Scenic Rim Regional Council, work is already underway on Sharp Bridge, Botan Creek Bridge and Back Creek Bridge on Beechmont Road.

“A further five bridges are in the final stages of design. The additional bridge projects are being funded by the Commonwealth Government Bridge Renewal Programme, and the Queensland Government Transport Infrastructure Development Scheme along with contributions from Council.”