Bridge replacements to improve access and safety in Wright 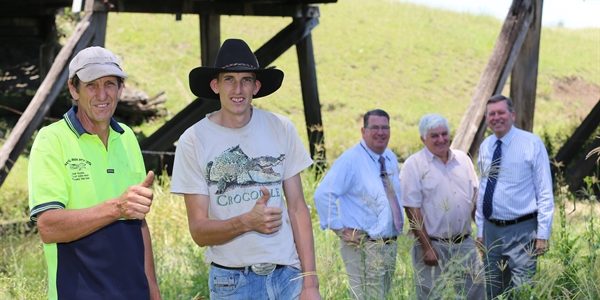 ROAD users will have access to safer and more reliable local travel when three Scenic Rim bridges are replaced in the next 12 months through the federal government’s Bridges Renewal Program.

Churchbank Bridge at Mutdapilly, Adams Bridge at Rosevale and Tramway Bridge at Christmas Creek will be replaced at a total cost of $7.89 million, $3.94 million of which will be federally funded.

“It is clear the Scenic Rim council has thought seriously about how well their proposal serves the community and have considered the needs and priorities of residents and local industry,” he said.

“Good bridges are crucial to making sure people in the community get clear access to essential services and a strong regional bridges network also helps drive the local economy.

“These bridge replacements will give people in business – particularly in the agricultural sector – greater certainty that they can move road freight around efficiently.”

Mutdapilly landholders Robert and Nathan Kliese, who run a hay production and stud cattle property next to Churchbank Bridge, said the replacement would boost efficiency for their business and make the road safer.

“As it is, if there’s an accident on the Cunningham Highway and they divert the traffic along here it becomes like a highway with all the trucks coming across that bridge despite the load limit,” he said.

“It’s like living next to a railway line and when big trucks go over it at night it sounds like an explosion.

“The new bridge will make it a lot safer and if we order cattle feed the truck will be able to get over the bridge safely instead of having to go the long way because of the load limit.”

“It's a great impetus to council's well-developed and continuing Bridges Strategy, which focuses on renewing the region's ageing timber bridges with more resilient, concrete or steel structures, and the countdown to reducing the number of timber bridges in the Scenic Rim has been accelerated,” he said.

“It is a competitive environment for the finite funds available through these programs and I thank the Federal Member for Wright Scott Buchholz, on behalf of the community, for his ongoing advocacy to secure the much needed funds for the enhancement of our road network, the lifeline of our local economy.”

Construction will start in June on the Tramway Bridge and August on the new Adams Bridge and Churchbank Bridge, with the three projects expected to be finished by March, 2017.