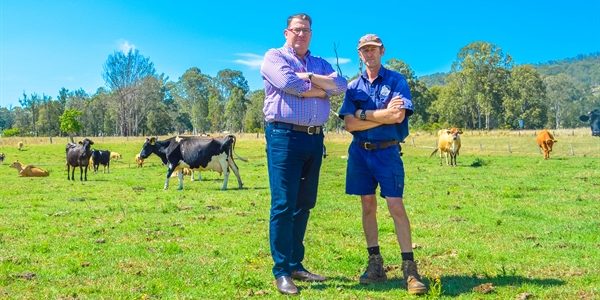 Federal Member for Wright, Scott Buchholz has written to all major milk processors in Queensland following an emphatic result in an online local poll where 97% of local residents from over 1,800 votes said they would pay 20c per litre more for milk if it is passed to the farmgate.

Mr Buchholz said it’s now time for milk processors to come to the table, back an increase to the retail cost of milk and be transparent and pass it through to local farmers.

“It’s clear, residents from right across the region will pay more for milk if the processors pass that direct increase on to the farmer,” Mr Buchholz said.

“It’s tough out there for farmers with drought conditions across the Lockyer Valley and Scenic Rim and the processors are the key to any price increase. The processors need to come to the table and be honest about their agreements and dealings and back a better deal for dairy farmers.”

Mr Buchholz said the time for talk is over and action needs to be taken now by the processors to ensure the survival of local dairy farmers in the Lockyer and Scenic Rim.

“This is an issue very close to my heart and one I have been fighting for, for many years. The ACCC Enquiry last year found that there was no direct relationship between what retailers charged for milk and farmgate prices –  that’s got to change.”

“Currently, processors can impose milk prices and other terms of milk supply contract terms that are heavily weighted in their favour – but it’s in no one’s interest to have farmers forced off the land and dairy farms closing.”

“An unfair farmgate price is fundamentally harming dairy production and efficiency and also reduces the effectiveness of competition between processors.”

“Consumers are willing to pay 20 cents more – let’s make sure that all of the 20c increase goes directly to the farm gate and the farmers who deserve it.  I will continue to fight to local farmers on this issue and it’s clear that local residents are also willing to back our hard-working farmers and keep them in business.”