Buchholz goes into bat for the Mountain: Urges changes in health classification 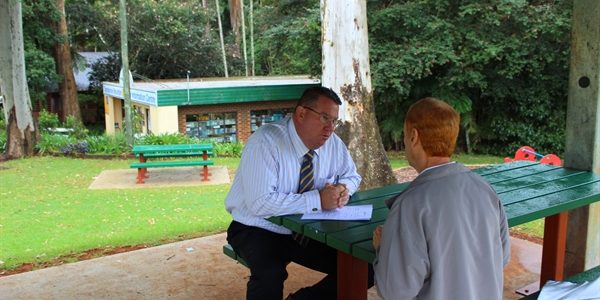 Local Tamborine Mountain residents who are concerned about a reduction in health services under a new Federal Health classification system have a strong voice in MP Scott Buchholz who described the change as “madness” and has vowed to continue fighting for a fairer deal for Tamborine Mountain.

“I’ve met with local health providers, listened to the concerns of local residents and I want to assure them that I am fighting to have the Mountain reclassified.  It is just madness that under the new model Tamborine Mountain has been deemed part of a “major city” and therefore won’t attract the same supports that other more regional areas can.”

“Tamborine Mountain is classified MMM1 under the system that gauges “remoteness” yet, just down the road Boyland is MMM5.  Canungra and Beaudesert are MMM4.  I’m arguing that the Mountain should not be lumped in with Surfers Paradise and the greater Gold Coast just because a statistician at the ABS had put it there.”

Mr Buchholz said he was lobbying both the Health Minister and the Minister for Rural Health to find a solution to the unfair classification.

“Under the guidelines, the MMM1 category is based solely on the ABS classification of remoteness. They calculate it based on proximity to a major city via road distance. But Tamborine Mountain is unique – our topography and our access to public transport means that our community is more self-contained and fewer people travel to the Gold Coast or Brisbane.”

“The drive up and down the Mountain, while scenic, is not one you’d want to undertake if you were feeling unwell and because of its nature takes longer than the same distance would from the bottom of the Mountain. An assessment on kilometres alone is deceptive.”

Mr Buchholz said that overall the new Modified Monash classification scheme was designed to be a fairer and truer measure of “remoteness” – but it is clear there is the need for exceptions when the Tamborine Mountain community was classified as “major city”.

“I want to thank the residents on the Mountain for their letters and survey forms – they add real weight to my representations to the Minister and the Distribution Working Group that is looking to update the classification.”

“I will continue to fight for fairness for the residents of Tamborine Mountain.”