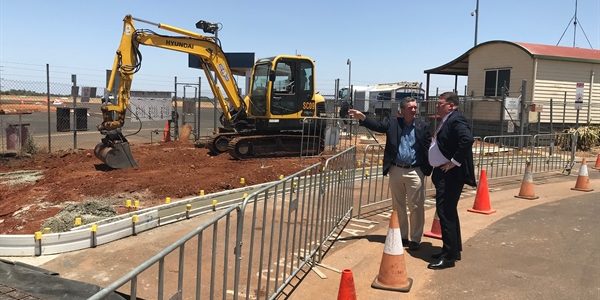 The Federal Assistant Minister for Road Safety and Freight Transport Scott Buchholz has met with Central Highlands Mayor Kerry Hayes to discuss what local infrastructure projects can be fast-tracked.

The Assistant Minister travelled to Emerald to meet with Cr Hayes following the Federal Government’s recent announcement on plans to bring forward infrastructure spending to boost the economy.

“Our Government has a strong commitment to regional areas and we have already committed to supporting a number of important local projects.

• $15.2 million to upgrade the Capricorn Highway between Emerald and Rockhampton
• An increase in Roads to Recovery funding to the Central Highlands Council to $10.8 million over the next five years.
• $418,000 in road Black Spot funding to provide safety upgrades to a number of intersections around Emerald
• $1.4 million towards the Emerald Airport General Aviation upgrade
• $1 million towards expansion and upgrade of the Emerald Saleyards

Cr Hayes said the meeting provided a good opportunity to speak to the Assistant Minister about local roads and infrastructure.

“As someone who grew up and began his working career here locally, Scott Buchholz understands the key issues when it comes to infrastructure,” Cr Hayes said.

“The CQ Inland Port at Yamala will be a major project for our region given the increase in the local freight and transport on our roads and rail.

“The Federal Government has $2.9 million set aside to support this important project with more available.

“The Assistant Minister appreciates the importance of our region as a hub for Central Queensland’s mining and agricultural industries and the need to boost infrastructure,” Cr Hayes said.

“We’ve announced $60 million in the region for the Townsville to Roma corridor that will upgrade and seal roads that are becoming important freight routes.

“We’ve also allocated $190 million to the Rockhampton to Mount Isa corridor that will deliver improvements to highway and connecting roads once the Queensland Government commits to its share of funding,” Mr Buchholz said