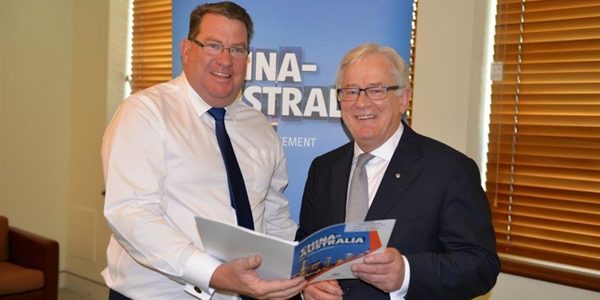 Member for Wright Scott Buchholz says local businesses in Wright are another step closer to realising the enormous opportunities created by the Free Trade Agreement with China, after implementing legislation passed the Senate today.

“The Government has worked hard to ensure this high-quality agreement with our biggest trading partner enters into force before the end of the year, and today’s vote marks a significant milestone in that process”

“Soon we will see an immediate round of tariff cuts, followed by a second round of cuts on 1 January 2016, allowing the benefits of the agreement with China to flow quickly through to our local agricultural and industrial exporters as well as consumers” Mr Buchholz said.

Following the vote, Trade and Investment Minister Andrew Robb acknowledged the support of the Opposition, which he said continued Australia’s long-standing tradition of bipartisan support for freer trade.

The bills set out Australia’s tariff commitments under ChAFTA and will enable goods that satisfy the FTA’s rules of origin, to enter Australia at preferential rates of customs duty.

Amendments to several regulations – including those the Government agreed to with the Opposition last month – will shortly be submitted to the Executive Council for approval.

“The agreement will enter into force when Australia and China have both completed their domestic treaty-making processes, and we’re working with China for this to happen as soon as possible,” Minister Robb said.

“Together with the Trans-Pacific Partnership Agreement, the trade agreements with Asia form a key plank of the Government’s strategy to promote jobs, growth and innovation in this critical post-mining boom period.

“The powerful trifecta of Asian agreements account for over 62 per cent of Australia’s export market and provide Australian businesses with access to more than 1.5 billion people, opening up endless opportunities across goods, services and investment,” he said.