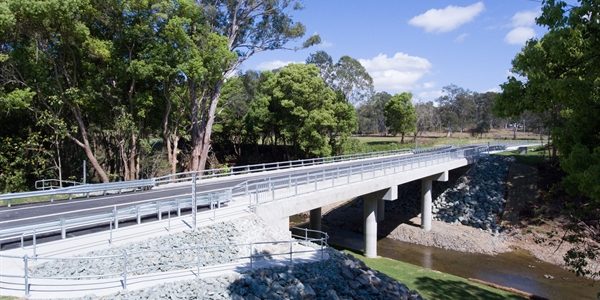 The new and improved $3.2 million Chardon Bridge at Cedar Creek has officially opened to traffic.

The Logan City Council and City of Gold Coast replaced the timber bridge with a modern two-lane concrete structure through a $1.6 million grant from the Federal Government’s Bridges Renewal Program.

“The opening of this new and improved bridge will have an immediately positive impact on the local community,” Mr Buchholz said.

“A strong bridges network is crucial to ensure local residents have a safer run on our roads and improve connectivity ensuring community access to essential services.”

“I commend the Logan City Council, City of Gold Coast and all the workers on a job well done. I’m pleased the Australian Government could pitch in towards these important works for the benefit of our region.”

City of Logan Mayor, Luke Smith said replacement of the former timber bridge had begun in mid-April to ensure the ongoing safety of motorists and other bridge users.

“As well as the bridge replacement, road pavement rehabilitation works were also undertaken on the approaches to the bridge and new road drainage, guard rails and signage were installed.”

The new bridge is approximately six metres higher than the previous structure to reduce flooding impacts during wet weather events with a two-metre wide path on the north eastern side of the bridge.

Mayor Smith said Council wanted to thank the community for the patience they had shown during the construction works.

“To allow these works to proceed it was necessary to put in place a number of diversions and while these may have caused some disruptions to motorists we hope that they now appreciate the new structure,” he said.