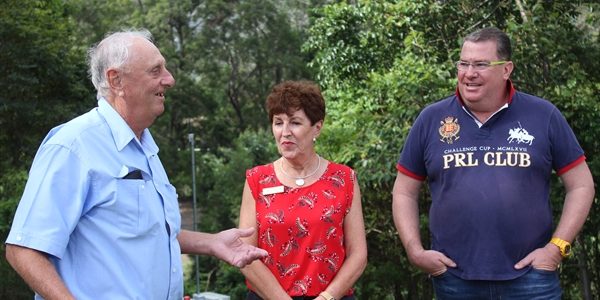 Local community leaders have thanked President of the Canungra Sport and Recreation Grounds, Wayne Reiser for his continued service to the local community.

Mr Reiser was expected to step down at the most recent annual general meeting, but he opted to continue his service for another term.

Member for Wright Scott Buchholz said Wayne was a leading example of community spirit and dedication, and the position was a volunteering role.

“When I ran into Wayne at the community awards recently I thought, ‘maybe after 30 years of dedicated service he has surely had enough.’ I was wrong and it is testament to his character that he continues to serve the community he loves dearly.

“I look forward to continuing to work with Wayne and his committee into the future, it is great to have proactive groups working for the betterment of Canungra,” Mr Buchholz said.

Division 3 Councillor Virginia West recalled a conversation with Wayne, in which he told her when he took over the role of President the committee barely had enough money in their bank account to buy a lightbulb.

“I know that after much hard work, dedication, working with all levels of government and successful grant applications the grounds now have many new assets and a healthy bank balance to operate.

“This is a tribute to Wayne’s leadership over this period of time,” Cr West said.

The Canungra Sport and Recreation Grounds is host to many leading local events, attracting tourists all year round. Recently the grounds celebrated the completion of the sewerage upgrade that enhanced the grounds capacity.