CONGRATULATIONS TO THE BOONAH SHOW SOCIETY 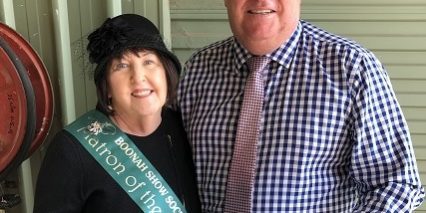 Member for Wright, Scott Buchholz has congratulated the Boonah Show Society and Show Committee on another successful country Show in 2019.

“Once again the Boonah Show Society has exceeded expectations and the hard work and dedication of John Brent and his entire committee has paid off.

“I also want to congratulate the entire community for getting behind the Boonah Show, because without your support shows such as this would cease to exist.

“The 2019 Show has been an example of the benefit of country shows to the local community, bringing locals, producers and tourists together,” said Scott Buchholz.

Beyond the rides, show bags and fairy floss, agricultural and country shows educate and showcase new technologies, livestock and produce.

Mr Buchholz said country shows are an integral part of many rural communities in the electorate of Wright and residents were lucky to have many agricultural shows to visit during the year.

“As a member of parliament representing a seat with a significant rural area and many small townships, I recognise the value of agriculture to deliver a strong economy and to keeping regional and rural communities thriving.

There are Shows in Beaudesert, Boonah, Kalbar, Mudgeeraba, Tamborine, Canungra, Gatton and Laidley.  These shows bring people together to share in the rich tapestry of rural life and our local and regional economic and cultural strengths.

“Hardworking volunteers of our local show societies are the pillars and stalwarts, bringing these annual events to life and I look forward to continuing our support for Agricultural and Industry shows,” Scott Buchholz said.