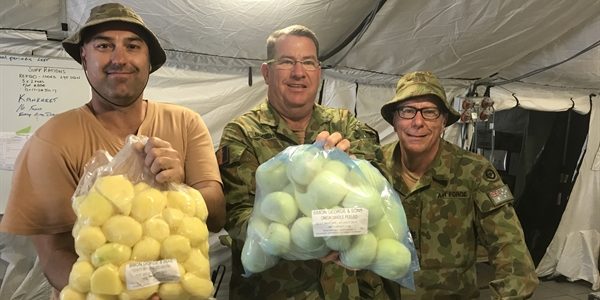 Australian and American military personnel taking part in Exercise Talisman Sabre in north Queensland were treated to a taste of the Fassifern Valley with locally grown and processed produce on the mess hall menu.

“It’s fantastic to share our local produce with our military forces, it’s just one way we can support the men and women who serve in defence of our nation.”

Fresh, local produce was processed by local vegetable processor VegPro4 for the mess hall menu during the military exercise.

Mr Buchholz enjoyed the reminder of home while in Shoalwater Bay as part of the Australian Defence Force Parliamentary Program observing the biggest joint exercise by more than 30,000 Australian and American military personnel.

“I looked forward to breakfast, lunch and dinner knowing it would feature local produce, it’s a great example of the success of our local producers and processors,” Mr Buchholz said.

“The Fassifern Valley is feeding our defence forces and I’m sure locally grown produce plated up plays a part in the strength and success of our military forces.”