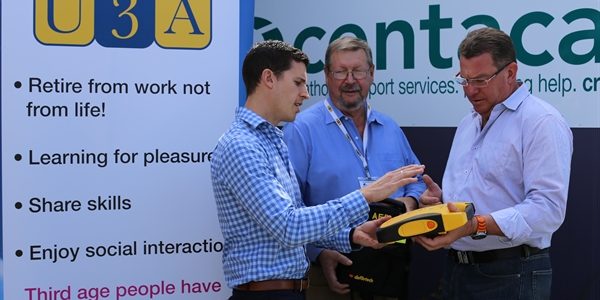 TUTORS from Beaudesert U3A (University of the Third Age) spent an hour last week becoming familiar with a device they hope they will never have to use.

They attended the delivery and demonstration of a defibrillator machine by the director of Priority First Aid (Ben Gray), attended by the Federal Member for Wright Scott Buchholz.

The machine – which was purchased largely with a grant of $2000 through the Federal Government’s Volunteers Grants Program – will be housed at Centacare in Petersen street, where many of the U3A programs are held, and will be available to Centacare staff if needed.

It will also be taken by tutors to various physical activities held by U3A around Beaudesert.

“We like to think we are keeping older people out of the health system through these activities,” he said.

“However, because we are an organisation mainly for over-50s, this seemed a sensible way to go.”

The defibrillator purchase was suggested by U3A Webmaster George Evans, formerly a fireman in London, whose professional life convinced him of its value.

“This is the first time in the small grants program that I’ve seen an application that could save lives,” said Mr Buchholz.

He said 86 groups across the Wright electorate had gained funding in the recent round of grants, which were aimed at helping non-profit organisations to achieve their goals.

Demonstrating the defibrillator, Ben Gray told tutors they did not need to be afraid to use it in an emergency.

“The defibrillator is the boss, it will tell you what to do, so just listen and you can’t go wrong,” he said.