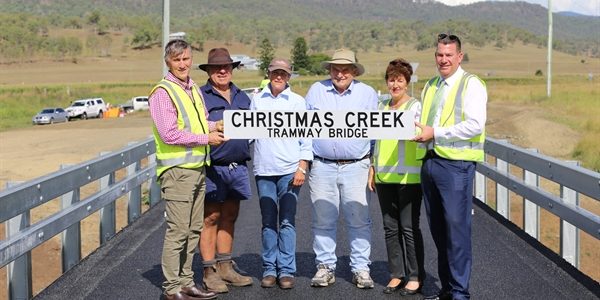 THE new and improved $1.84 million Tramway Bridge at Christmas Creek has opened to traffic.

“This new and improved Tramway Bridge is an investment in the local economy, because it will give motorists, particularly the ones with heavy loads who would previously have had to go the long way, a more direct and efficient route to get from A to B,” he said.

“This is fantastic news for locals, and I commend the Scenic Rim Regional Council and all the workers on a job well done.

“I’m pleased the Australian Government could pitch in towards these important works for the benefit of our region.”

Mayor Greg Christensen said Tramway Bridge was one of four ageing timber bridges being replaced by council in 2016-17, three of which were being co-funded by council and the Australian Government.

“I want to acknowledge the support of the federal government and the advocacy of the Member for Wright Scott Buchholz in helping council to deliver these important infrastructure renewal projects,” he said.

“The delivery of four new bridges in 2017 will reduce the number of timber bridges currently maintained by council from 78 to 74 in an overall network of 129 bridges. This is a great outcome for our region.

“As well as being safer, new bridges require less ongoing maintenance and, importantly, are free of load limits for heavy vehicles. This is an important consideration in our rural areas for the movement of trucks and farm equipment.

“The renewal of the region's ageing timber bridges with contemporary concrete or steel structures is helping to realise the shared Community Plan vision for an accessible and serviced region.”

Division Three Councillor Virginia West said the re-opening of the bridge had been much-anticipated by the local community.

“Tramway Bridge is an important linkage for this area and the community have been watching the replacement project with interest,” she said.

“They've been very much looking forward to the opening of the new crossing, particularly the improved level of service it will afford through the removal of the previous load limit.”