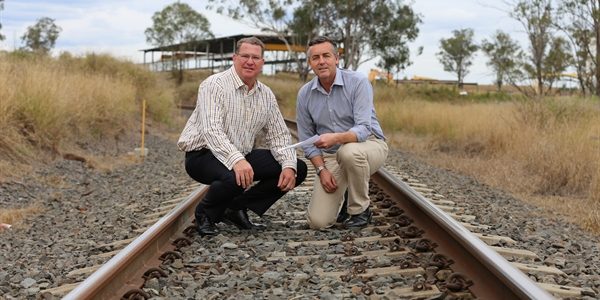 Federal Member for Wright Scott Buchholz said the project would ensure demand for Australian domestic product in Asia is met.

He said the SCT intermodal freight and logistics facility being constructed at Bromelton could play a key role in the operation of the project.

Mr Buchholz on Tuesday, May 31 took Minister for Infrastructure and Transport Darren Chester to the future site of the $30 million facility which is being boosted by a $9.6 million grant from the Coalition.

He said the facility would provide local jobs on top of the huge number of jobs expected to be created throughout the construction and operation of Inland Rail.

“Inland Rail and the SCT intermodal are critical to local employment and the local economy with both projects to boost opportunities for the expansion of our region’s agricultural exports,” Mr Buchholz said.

“The intermodal alone is expected to create 125 jobs initially, increasing to 1000 jobs in the longer term, while Inland Rail will create up to 16,000 jobs during construction and 700 jobs while in operation.

“Inland Rail will make it easier and cheaper for our local producers to send their product to national and overseas markets by providing a sub-24 hour freight travelling time between Brisbane and Melbourne and the SCT intermodal itself will support the annual transfer of up to 795,000 tonnes of freight.

“We expect an easing of pressures on the road network, reducing costs for intercapital freight travelling between Melbourne and Brisbane by around $10 per tonne.”

He said the east coast freight corridor between Melbourne and Brisbane generated 75 per cent of Australia's gross domestic product and was responsible for commodity exports of more than $260 billion each year.

“Inland Rail is a truly transformational project that will open up the freight corridor between Melbourne and Brisbane, via regional New South Wales, and boost productivity for decades,” Mr Chester said.

“It reduces the strain on other infrastructure in our national network and provides a freight solution capable of carrying the eight million tonnes of additional freight expected to be travelling between Melbourne and Brisbane by 2050.

“While the final alignment is subject to planning and environmental assessments, the $594 million provided in our most recent Budget on top of our previous $300 million commitment, will make sure that the project is soon shovel-ready and more importantly, delivered over the next decade.

“The additional funding is being directed towards refining the corridor and land acquisition. As the alignment is decided we will be provide certainty to affected landholders and communities.”