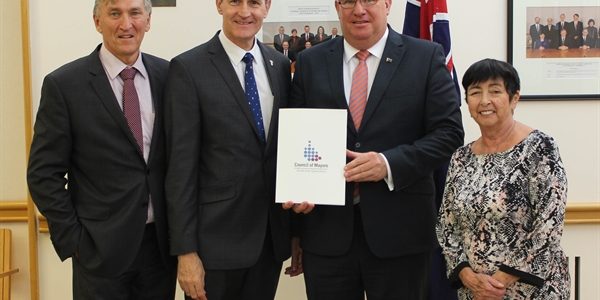 “I want locals who live in the Scenic Rim, like Boonah and Beaudesert and work in the city to get home sooner and have dinner as a family,” Scott Buchholz said.

“I want tradies who travel up and down the Mt Lindesay Highway to spend less time on the road and more time on the tools and I want to ensure our vibrant region remains a major tourism destination. That’s what our SEQ city deal is all about.”

Scott Buchholz said the Scenic Rim is an integral part of the South East Queensland City Deal and is project to grow over the coming years.

“South East Queensland is already home to over two thirds of the state’s population and is expected to accommodate 5.3 million people within 25 years’ time,” Mr Buchholz said.

“We need to cater for this rising population locally in the Scenic Rim and the SEQ City Deal will be a huge step forward in making sure locals get the most out of living in this beautiful region.”

Scenic Rim Mayor, Cr Greg Christensen said the announcement of the SEQ City Deal represent an exciting opportunity for the certainty of a sustainable future for South East Queensland and Scenic Rim as a part of that region.

“The combined effects of the 10 councils in the Council of Mayors over a number of years has been focused on drawing state and federal commitment to work with us on a long-term systematic approach to identify and deliver the critical underpinning for a successful and sustainable South East Queensland.

“This is not a short-term fix. This is a program that will be inter-generational and lay out a plan that enables strong economic growth whilst ensuring we also protect the character and nature that makes our region great.

“However, it is a significant milestone and I am encouraged by the enthusiasm of Queensland's Deputy Premier Jackie Trad and Federal Minister for Cities, Urban Infrastructure and Population Alan Tudge for pressing forward with the next steps of this in clarifying the way to finalise the structure.

“All of us in the Council of Mayors are keen to move forward. A common focus and joint leadership from all levels of government will serve our communities best in delivering a strong sustainable future for South East Queensland.”