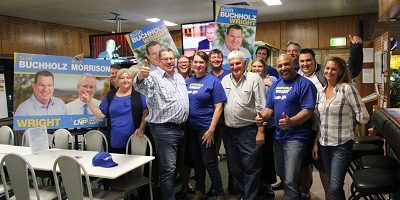 “I am humbled to be once again supported by the people of Wright, with a swing to me of around 5 per cent two-party preferred. But I know I have more to do.

“The community has spoken, choosing lower taxes, a stronger economy and safer borders over higher taxes.

“We are getting on with delivering our agenda of lower taxes, more jobs, better infrastructure and guaranteeing spending in health and education.

“Over the next few weeks and months I’ll be visiting the various communities in Wright. From Toowoomba to Robina, continuing the work we’re doing – listening, advocating and delivering.

“Locally I’ll continue to fight for better infrastructure, including the Mt Lindesay Highway, which the entire region knows is in desperate need of upgrading. We have provided $30m to start the project and I’ll be putting pressure on the State Government to come to the table and get on with it.

“It has been a privilege to serve as Assistant Minister for Roads and Transport. I am enthusiastic to continue to serve in whatever capacity, at the discretion of the Prime Minister.

“I have a sense from the community that there is a desire for stable leadership at the top of government. ScoMo has now closed that revolving door and a new era of stability has arrived. I know that is welcomed by all.

“The focus now is on the people. They have given us a gift of trust and we must uphold that.

“The election is over, the signs are coming down, the ads are off air and it’s now time to get back to work for the people of Wright.