TSRC on the move as Warrego Interchange works begin 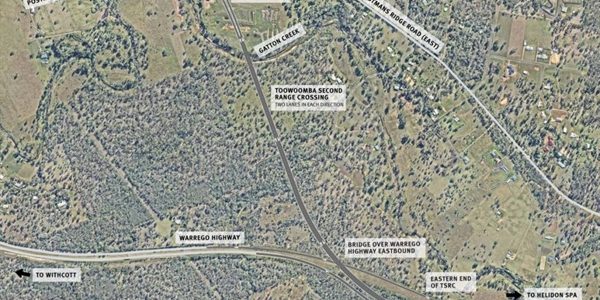 Federal Member for Wright Scott Buchholz has welcomed the beginning of work on the Lockyer Valley connection with the Warrego Highway at Helidon Spa as the Toowoomba Second Range Crossing (TSRC) reaches another milestone.

Mr Buchholz said the interchange would save time for commercial vehicle operators, directly supporting local businesses in the Lockyer Valley.

“Whether they are serving customers locally, interstate or overseas, freight operators need a strong transport network to meet the needs of customers,” Mr Buchholz said.

“The interchange will reduce travel times, ease congestion and more importantly, improve safety by giving our road freight industry an alternative route to the Toowoomba City centre as they cross the range.”

Mr Buchholz said the Warrego Highway eastern interchange would improve local producer’s access to the TSRC and the world beyond.

“Local producers will be more competitive in the global environment as the TSRC makes freight from supplier to market more efficient,” Mr Buchholz said.

Mr Buchholz said the new interchange would also improve the safety of both motorists and pedestrians in the local area.

“We will see up to 80 per cent of heavy vehicle traffic diverted away from Withcott and Toowoomba improving the safety and reliability for local motorists,” Mr Buchholz said.

The TSRC project is expected to be completed at the end of 2018. It is supporting up to 1,800 direct and indirect jobs during design and construction, with many of the jobs going to the local community.

The Australian Government has committed up to $1.137 billion, representing 80 per cent of the capital cost, to the project, with the Queensland Government contributing the equivalent of 20 per cent through a Public Private Partnership with the Nexus consortium.