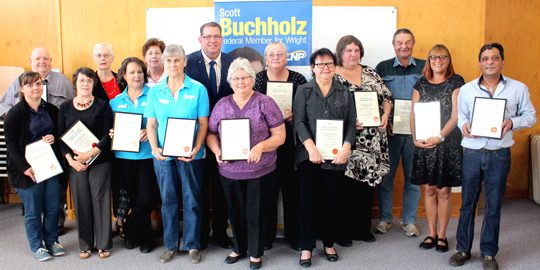 A host of locals from the electorate have been recognised for their dedicated voluntary work, as recipients of the 2017 Wright Community Contribution Awards.

Federal Member for Wright Scott Buchholz presented the awards in three special ceremonies across the electorate and praised the award winners as “unsung heroes” of the local community.

“I established these awards as a way to recognise the local volunteers who deserve appreciation for their outstanding contribution to our local community,” Mr Buchholz said.

“Life is short but our local volunteers generously give their time to the various community and sporting organisations that make our region such a wonderful place to live.”

Mr Buchholz said the Wright Community Contribution Awards were special in that the recipients were nominated by grateful members of the community.

“These awards allow our grateful community to recognise the many dedicated and hardworking local residents of the electorate,” Mr Buchholz said.

“It is my pleasure to congratulate the recipients of the 2017 Wright Community Contribution Awards and thank them for their contribution to our community.”