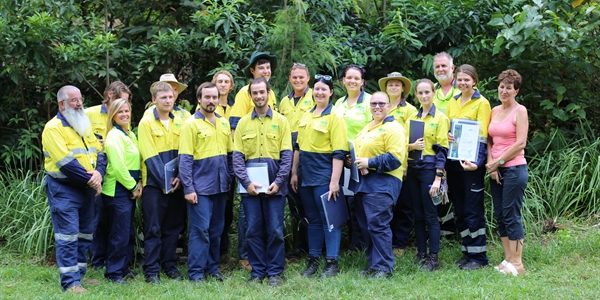 COMMUNITY leaders have praised the work of local youth in rehabilitating the environment after Green Army participants planted more than 42,000 trees in Scenic Rim.

The sense of accomplishment was strong as 14 youth graduated from the federal government’s Green Army program in a ceremony at Canungra on Thursday.

The final two teams of graduates were among participants from eight teams who worked on projects in Beaudesert, Barney View, Beechmont, Witheren and Canungra since 2015.

Federal Member for Wright Scott Buchholz said their contributions provided a major boost to the local community and the environment.

“I thank everyone involved for your contributions to these projects, and I am pleased the federal government has been able to support this work,” he said.

“This is work these young people can be proud of, and the skills they have learned will set them up well for the future.”

“We are so appreciative of the work from these latest teams of participants and grateful also for the work of the teams who have gone before them,” she said.

Caption: Division 3 Cr Virginia West (right) congratulates Green Army participants and supervisors for their work in Scenic Rim at the graduation in Canungra.