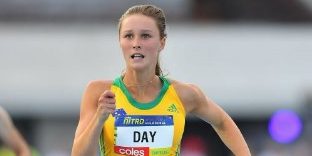 13:40  I bring good news to this parliament. Good news by way of a rising sports and athletics star: young Riley Day. Riley, who is in year 12 at Beaudesert high school, ran for Australia recently at the Nitro Athletics series in Melbourne on Saturday. She came second in the women's 150-metre sprint, just behind an Olympic semifinalist, which was the calibre of the athletes that were at the Nitro Athletics series. Riley also had the pleasure of running against Usain Bolt's All-Stars team and got to run the second leg in the lane next to Bolt himself, a memorable occasion for her.

It has been the talk of the town in Beaudesert. Everyone sat around their televisions on Saturday to cheer the local girl on. Riley gave it her all and, as a community, we are all extremely proud of her. She will run for Australia again in the second round of the series tomorrow, and I am sure the cheers will be just as loud for our little local hero.

The finals, which are already sold out, are on Saturday, and I know that at least a few of our Beaudesert local residents have managed to nab tickets and have taken the opportunity to fly down to watch her live. She will back up next week as well, flying down here to Canberra to take on the nation's best at the ACT state championships. Once the excitement of the Nitro series and the ACT state championships are over, Riley will run full throttle at her next goal, which will be to represent the country at the Commonwealth Youth Games in the Bahamas in July. What an incredible experience for a 16-year-old girl from Beaudesert! As a community, we could not be more proud of the little champion, and we wish her the best.