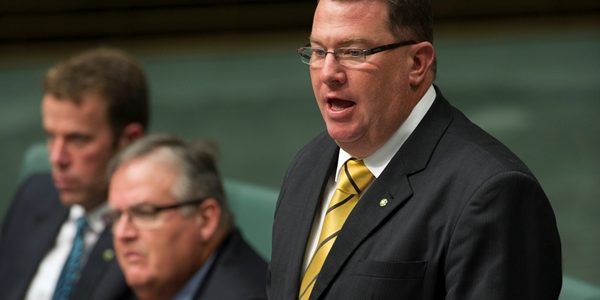 18:53  I do not often speak on condolence motions, but Senator Trood is a person that I would refer to as a personal friend and, having heard the contributions from both the member for Ryan and the member for Rankin, I want to associate myself with both of their comments. They were both heartfelt speeches, and I would probably not do the good senator justice in my delivery, but nevertheless I will give it my best shot.

Senator Trood was a gifted man in the field of academia before coming to the Senate. He was far from fitting the profile of a Liberal senator; he was amongst the most left-wing-thinking in Griffith University. He contested the seat. He always had an interest. He contested the third seat on the Liberal Senate ticket and, as the member for Ryan alluded to, a little-known-then Barnaby Joyce was contesting the second seat.

It was uncommon—I think it was unprecedented—that Queensland returned four conservative senators at that election, with two from Labor. Nevertheless, history has written its pages, and Barnaby has gone on to bigger and better things. Senator Brett Mason is now serving in the diplomatic corps. Senator Brandis needs no introduction as the country's A-G.

What was evident was the number of people in the room at the memorial, not the volume of people but the quality of people who were there. There were past senators who had come back. Senator Boswell was there and spoke to me at length about his relationships with Russell. Senator Brandis spoke at the memorial, as the member for Ryan alluded to. It was an amazing speech, as were all of them.

I want to just draw your attention to one of the speeches there, which was from Senator Ronaldson. Senator Ronaldson and Senator Trood and their wives had been out for a function, and Ronno recalled the story that after the function they were in the car driving home, and Ronno's wife said to him: 'He's far too nice to be a senator. He's far too nice to be a politician.' Ronno said to his wife, 'You've never said that of me,' and her response was, 'You're right.' But Russell Trood was a terribly nice bloke.

I was so privileged to see Senator Russell Trood some time ago, before he got ill. He passed away with thyroid cancer. I saw him at his best in the corridors here. He always had a passion for this place. He stayed connected to it. I saw him at his best, and that is the memory that I will hold of Senator Russell Trood. I was also fortunate to have him as my patron senator. I do not know about the Labor world, but as lower house members we have patron senators; they will look after a group of seats. The electorate of Wright was a new seat brought about by the redistribution, and Senator Trood was my patron senator. He came out in the first week during the campaign, and he suggested that it would be advantageous for me to travel with Senator Russell Trood around the electorate, and we did that.

Just after lunch on one hot day we thought we would pop in at the Helidon pub. Helidon is a beautiful part of my electorate, with an old weatherboard pub. It was hot. It was the middle of the day. I said, 'We should duck into the pub for a quick cleansing ale, Senator.' He said, 'That sounds wonderful, except it's a little early.' I said: 'It's after 12 o'clock. Come on.' So we went into the pub, and I had some of my staff with me. I suggested to him, 'What would you like to drink?' He said, 'Oh, I'll have a white wine,' and I went, 'You're not having a white wine in the Helidon pub; you'll have a beer,' but I said, 'I'll see if I can get you a white wine.' I said to the barman, 'Mate, have you got any wine?' He said, 'Moselle.' I said, 'Just two Golds, thanks, brother.' So he drank a beer.

I do not think he was that comfortable in the regional provinces of the electorate, but he was very, very comfortable on the international stage in and around foreign policy and foreign development. He served on parliamentary delegations to Japan, South Africa, Zimbabwe, Ghana and Ethiopia. He also served extensively on committees relating to foreign policy, from foreign affairs, defence and trade to intelligence and security. Our Prime Minister, Malcolm Turnbull, described Russell Trood as having one of the finest foreign policy minds. If he were still in the house as a senator—elevation can come in many different ways, but there needs to be some type of formula of talent, service of time, geographical location and mathematics—and if those planets aligned for him, I have no doubt that he would be serving in a higher capacity, a higher office, in and around somewhere in that foreign affairs portfolio space.

Also at the memorial was the member for Rankin, the President of the Senate, Senator O'Sullivan, state members and others. It was a memorial testament to his contributions both to academia and the parliament. But noteworthy of a gathering of that calibre was the number of staff who had served with Senator Trood. He did not have a high turnover of staff. As members of this place, we can let our minds go to members who churn staff through, for whatever reason it may be. Senator Russell Trood had a very stable staff when he was serving in office. I want to acknowledge Fraser Stephen—who is still a linchpin for that group and who brings the staff back together for Russell Trood on a regular basis—Marty Kennedy and Greg Birkbeck. Marty served with me when he finished with Russell in a media capacity and Greg Birkbeck today still serves as my chief of staff, which he has done from the day that I was elected. He has asked me to pass on, for the sake of Hansard, his deepest condolences to the family.

Russell will be missed. It is a salient point, and a reminder to all of us in this place, that when we stand to talk about condolences that we often shower accolade and affirmation on people's contributions to either the parliament or to their communities. I just suggest that, at times like this, it would be so appropriate for us to be a little more generous in our community with the compliments that we pay to people who are alive so that they can hear it themselves. That affirmation could lift them and they could maybe make a greater contribution to communities. It saddens me that someone needs to leave this place—pass from this earth—before we shower them with accolade.

Trood is worth the accolade that I have bestowed upon him this afternoon. He was a good man. He was a man who was well respected both in the political landscape and in the area of academia. I have not gone too much into his academia space because I did not know him then. I knew him when he was here. I also know Dale. I have met her a number of times in passing, such as passings at the airport. I remember the first time I met Dale, his wife. I pulled up and I gave Trood a hug because I had not seen him for a while. As they were walking away I could hear them, and his wife said, 'Who was that?' Trood's response was: 'He's one of the good fellas. He's one of the good guys.' So I will always have a soft spot in my heart for him. My heartfelt prayers and thoughts go to his many friends and his family—Dale, who I just spoke of, his two children, James and Phoebe, and his brother, Arty, who was at the funeral.

As a mark of respect, I invite all honourable members to rise in their places.

Honourable members having stood in their places—

I thank the chamber.