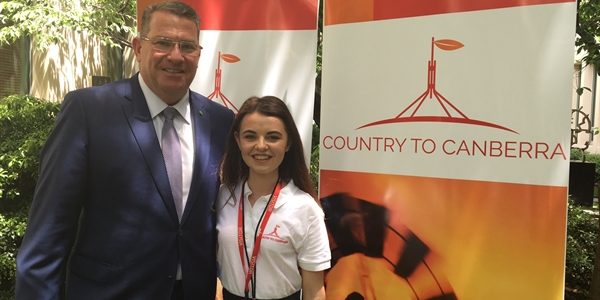 Mr BUCHHOLZ Wright) (10:27): Earlier today, this chamber was fortuitously full of women. I was outside checking my phone, where I was reading the speech I am about to make about an inspirational young woman from my electorate.

I stand here today to applaud a young lady in my electorate by the name of Kaitlin Bell. I met with Ms Bell this week to personally congratulate her for being a winner in the Country to Canberra power trip competition. Ms Bell was one of 12 young women in Australia to win the leadership competition, and this week got the opportunity to meet some of the nation's most powerful leaders, like our foreign minister, Julie Bishop. I have no doubt this was an empowering experience and that Ms Bell will hold dear those memories as she forges into her adult life.

The competition was one where they wrote a poem or a piece of literature, and the topic was 'Why is gender equality important to you and your community?' Young Kaitlin was the winner for Queensland. She is 17 years old and hails from the tight-knit community of Beaudesert. She is a student of Beaudesert State High School. I would like to take this opportunity to acknowledge Alan Smith, the principal of the school, and his deputy Damian O’Brien. There are also another couple of deputies there. They all do an incredible job at the school, and young Kaitlin is testament to that. She is part of a leadership program, and she is also one of the deputy captains of the school.

Kaitlin loves to dance. She is passionate about the arts and equality, particularly for those youth with disabilities. She is bright and bubbly and intelligent, but she has had to battle through some immense challenges of her own. Kaitlin was born with a rare bone and kidney disease, called vitamin D resistant rickets. This means she cannot absorb vitamin D from the sun, and her bones are particularly brittle. She had to undergo a series of surgeries at the age of 13 to straighten her legs, which had started to curve backwards. She used to get around in a wheelchair before her surgery, which allowed her to connect with disabled students at her school.

What is truly inspiring and impressive about Kaitlin is that she was determined to push through. She had 16 metal rods inserted in each leg. Those rods stayed in Kaitlin's legs for more than 12 months and each night they had to be tightened to straighten her legs. It was an enormous and arduous commitment. For 12 months she remained bedridden and on painkillers. In order to keep up with her schooling she did distance ed. She worked incredibly hard to build the muscles back up in her legs so that she could walk. Before too long, it was full steam ahead for Kaitlin. She got involved with student council, school dance teams and helped out with fundraisers. She now practices dance as well. This year, for the second year running, she has been involved with the Queensland youth parliament. She uses it as a platform to champion her push for equality in the arts.