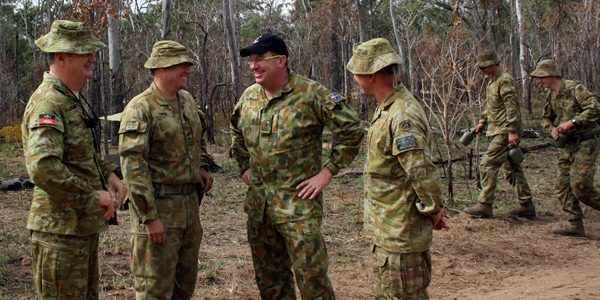 Mr BUCHHOLZ (Wright) (16:15): Recently I had the great pleasure of being part of the Australian Defence Force Parliamentary Program, when the shadow minister for defence, Richard Marles, and I attended Exercise Talisman Sabre on Shoalwater Bay—and I want to acknowledge today the servicemen who are on the reciprocal part of that program. James Hagan, who is here in the chamber, is one of the officers who has come to spend a week in the parliament.

Over 30,000 personnel trained and tested amphibious landing aircraft, parachutes, operations and landing force manoeuvres during the exercise. As four C-17s arrived over an airfield to drop parachuters out of the back of the aircraft, I said to the commanding officer, 'Will they need any enthusiasm to jump out of the back of the aircraft?' He said: 'No, those parachuters will need no enthusiasm, whatsoever, to jump out of that aircraft. They have been on it for 45 hours. It was a direct flight from Alaska, where they had been practising their midair refuelling. They will be on the ground for about 48 or 72 hours, and then they'll be packed up and sent back to Alaska as part of the marine contingent.' The logistics and planning that went on in that exercise were just remarkable.

It was a great experience to be able to be part of that, and I would encourage any of the members in this place who have not participated in the Australian Defence Force Parliamentary Program to do so. While staying there as part of the Army contingent, I experienced the salubrious accommodation they refer to as a hutchie. It is a small piece of tarp that serves as your shelter for the evening, and you lay out your bedding that looks more like a yoga mat. I was extremely boisterous in my opposition to the sleeping accommodation. But, whilst it gave me the greatest discomfort, it will also be the greatest memory I had while I was up there, exercising with the men in the field. It was great.

Over 200 personnel from my electorate were up there serving as reservists, ranging from radiologists, nurses, doctors and servicemen. What they do in their spare time is nothing short of admirable—and not only for their own causes. As politicians, we should know they offer a blanket of security for us as a nation so that we can sleep well each night.