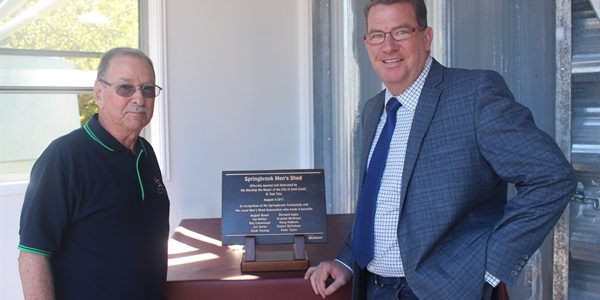 Mr BUCHHOLZ (Wright) (16:35): An interesting statistic: men take their own lives at four times the rate of women. That's five men a day on average taking their life. Recently, I had the great pleasure of attending the opening of the Springbrook Men's Shed Association. Springbrook is a beautiful little village nestled in the Gold Coast hinterland—a remarkable, robust little community. This community has demonstrated their resilience by organising their own men's shed. They procured some land from the Gold Coast city council. I want to publicly acknowledge Tom Tate, Mayor of the Gold Coast, who came up and was part of the opening ceremony. In particular, I acknowledge the president of the men's shed, Jim Darke, and 22 other members who, very industriously and entrepreneurially, procured a shed from the Defence facilities at Wallangarra—and I notice there's some Army personnel in the gallery today who are here on a Defence training program. They erected the shed themselves. That shed, in the community of Springbrook, will be the centralised hub. One of the amazing stories that came out at the opening was of two gentlemen who live on that mountain—a relatively small community—who live eight blocks apart from each other and didn't know each other existed. What a great day for men's sheds.