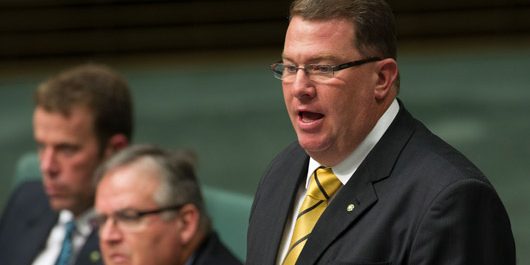 Mr BUCHHOLZ (Wright) (12:17): I rise to speak on this bill because this government continues to honour its commitment to veterans and the veteran community by recognising the unique nature of the military service. The Veterans' Affairs Legislation Amendment (Budget and Other Measures) Bill 2016 contains three measures to support veterans. It gives me great pleasure to speak to these measures and hear the support that exists in the chamber for these very well thought out and straightforward practical measures that are being introduced by government. These measures increase access to non-liability health care, allow interim incapacity payments to be paid at 100 per cent of their normal earnings and bring into line the cut-off age for incapacity payments to that of the pension age—all very simple measures.

In the 2016-17 budget, our government committed $0.2 million to these measures. It will allow the interim incapacity payments to be paid to former ADF members immediately upon discharge at the level that matches their regular salary. What was happening was that members of the Defence Force would retire or leave, and it could be a number of weeks—sometimes months—before the incapacity payments would take place through a rather rigorous assessment process. This measure allows for a more fluent transition as they move from full time into that pension period, where the payments are effective immediately. This is significant because current interim incapacity payments can only be equivalent to the national minimum wage, and when a member is discharged from the ADF there can be a period of time—sometimes for several months—before the incapacity payment amounts can be determined while superannuation entitlements are finalised. They are the measures that I spoke of before. Some members can go through financial hardship during this period of time because the government is not making payments. We all know that there will be commitments in and around mortgages. Food still needs to be put onto the table. This measure speaks directly to addressing the financial hardship that would have inadvertently been incurred by some of those ADF members. The amendment will allow veterans to receive their predischarge salary during this period. The Department of Veterans' Affairs will make an adjustment to the person's incapacity payments after the superannuation component has been finalised.

Escalating access to non-liability health care is a vital element of mental health treatment for current and former members of the ADF. In the 2016-17 budget, this government committed no less than $37.9 million to extend eligibility for non-liability health care to all current and former permanent members of the ADF for five mental health conditions: post-traumatic stress disorder, anxiety, depression, alcohol use disorder and substance use disorder. Post-traumatic stress disorder is such a terrible disease. I have some former members of the ADF in my electorate who, at face value, when you meet these guys, are physically fit. They are strong men—strong in character. I remember one member who suffers. During the 2010-11 Lockyer Valley floods their years of training kicked straight back in and they took charge of a community. Their military skills, when it came to systematically going through, street by street, using grid reference mapping, ensured that their community was safe. They took command in an environment where there was turmoil and chaos. These people suffer with these terrible demons of post-traumatic stress disorder, and it is worthy then to see the assistance that is available to these people. I did not know about the disease until these guys came to me and shared with me their symptoms and how it plays on their marriages. I commend their wives for the stress that they are put under. Anything we can do in this place to assist those terrible illnesses has my full support.

In addition to expanding the range of conditions for which nonliability health care may be provided, accessing this treatment has also been made easier. There is no need to lodge a formal application; a veteran can now call or email the Department of Veterans' Affairs and ask for treatment. There were a number of hurdles that were quite laborious in the past but we are reducing that and making it easier. Just one day of continuous full-time service means a person can access this treatment; there is no longer the requirement for a person to have had either three years continuous full-time service or operational service to be eligible for nonliability health care. That is an enormous amount of red tape reduction. There is no need for a formal diagnosis at the time of requesting treatment. The machine will actually pick up and go through a process of diagnosis. The treatment is known as nonliability health care because it need not be linked to a condition arising from the service of the eligible person. Further, it is completely separate from any claim for compensation.

The government committed $5.5 million to this measure in the 2016-17 budget, to improve support for veterans by increasing the incapacity cut-off age to align with age pension eligibility. This will enable veterans to continue to receive incapacity payments up until they become eligible for the age pension. Approximately 120 veterans per annum will benefit from this change.

Currently, payment of incapacity entitlements under the Military Rehabilitation and Compensation Act 2004 ceases when an employee reaches 65 years of age or, if the injury occurred on or after the age of 63, after a maximum of 104 weeks of incapacity entitlements have been received. This amendment keeps pace with the scheduled age pension increases, to ensure injured veterans may not be without adequate means of financial support upon reaching 65 years of age once the age pension eligibility changes take effect.

In a nutshell, this bill will support our veterans in real and tangible ways, from increasing access to vital mental health treatment, to better financial support for ADF members transitioning to civilian life and ensuring access to incapacity entitlements through to pension age.

This measure has been well received right throughout my RSLs and more recently at Remembrance Day over at the Lockyer Valley and at Gatton. I had the opportunity to catch up with a number of our past-serving diggers. The president over there is no less than Les Nash. We had a wonderful lunch afterwards at the RSL, and these measures were spoken about. These measures are being well received by those former-serving ADF members.

I would also like to take the opportunity to throw a bouquet to Lieutenant Colonel Aaron Hassall, who serves in one of the Defence facilities in my electorate, the Canungra army warfare training centre. He recently gave a speech on behalf of the ADF at a swap meet for military enthusiasts who brought along their tanks and jeeps—anything that was green was at the Beaudesert showgrounds. He gave an incredibly stirring address. He spoke passionately about the means of communication and transportation and how it had changed through the ages, from horseback right through to the world-renowned Bushmaster armed personnel vehicles used in Afghanistan. They are so well regarded by our allied forces that, when they are being shuffled around, the Americans and other allies would much prefer to be travelling with us because of the safety element in those machines. Aaron, I believe, is going to be taking up an office not dissimilar to West Point in the US, where he will be training Lieutenants Colonels for the American Army for the next two years—a very honourable position—and we should be proud as a community to know that we are sending the best of our soldiers to train the next generation of leaders for our allied forces in the Americas.

I also acknowledge the member for Ryan, who will speak on this bill. She is an enormous advocate for the Defence Force. She has the Gallipoli Barracks at Enoggera in her electorate. It was just recently that we were speaking—in my capacity on the capital works committee—about some of the work that we will be doing in that area and how acute the member is with the programs. She is also a proud mother of a son who serves in the Australian Defence Force. Any contribution that you make in this place, member for Ryan—I know you do it with a sense of loyalty and advocacy for the Australian Defence Force, and you should be commended for your support in this space.

Again I want to take this opportunity to acknowledge the opposition's support for this bill. I commend the bill to the House.