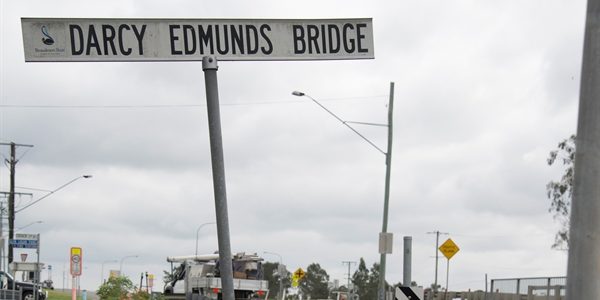 THE $1.4 million replacement of Darcy Edmunds Bridge in the Jimboomba town centre started this week, creating a safer and more reliable link for businesses and residents in the growing region.

The replacement is being jointly funded by the federal government and Logan City Council.

Wright MP Scott Buchholz said it was due time the bridge was replaced as traffic increased amid growth in Jimboomba.

“I congratulate the local Councillor Trevina Schwarz for highlighting the need for the bridge renewal and I was pleased that we were successful in gaining funding for the project,” he said.

“It’s been a bugbear for locals for many years, so its replacement will benefit the whole community, not only now, but in the future as well.”

Division 11 Cr Trevina Schwarz welcomed the project and asked local residents and motorists for their patience while the project was completed.

“The new bridge will open up transport routes that will support local businesses, residents and growth in the area,” she said.

“The bridge will be closed while the replacement project occurs so it can be completed as quickly as possible.

“Drivers will still be able to access Cusack Lane and its businesses as well as the Jimboomba Convenience Centre, and detours around the work zone will be provided.”

Logan City Council roads and water infrastructure committee chairman Cr Don Petersen said the existing timber and concrete bridge on Brisbane Street near the intersection with Cusack Lane had reached the end of its service life and was currently subject to a 25-tonne load restriction.

“It needs to be replaced to ensure the safety of motorists and other bridge users in the future and support the ongoing economic development of Jimboomba and surrounding suburbs,” he said.

“The project is being jointly funded from council’s 2015/2016 Capital Roadworks and Drainage program and the Australian Government’s Bridges Renewal Programme, and I am very proud of the cooperation to get this strategic project started.

“The bridge is an important link in the Jimboomba town centre and is frequently used by local people accessing the retail, school and commercial areas.”

Most construction work will be carried out during the day from Monday to Saturday but there might be some night work for the delivery of large bridge components and asphalting works.

Affected residents and businesses will get written notice before any night work happens.

Construction will involve demolition of the existing bridge, excavation of the rock cutting and construction of a new arched concrete bridge, retaining walls and associated infrastructure.

The project is expected to be finished in April 2016, weather and construction conditions permitting.