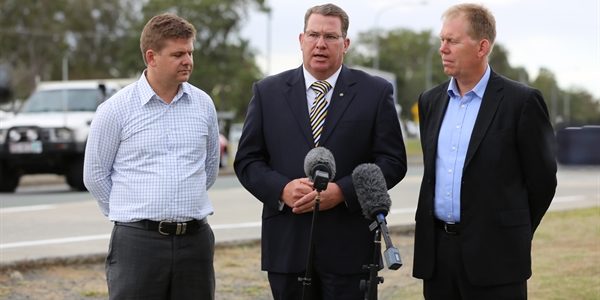 $10 million will be provided to help address short-term congestion and safety issues on the Mt Lindesay Highway between Beaudesert and the Logan Motorway under a re-elected Coalition Government.

Federal Member for Wright Scott Buchholz and Federal Member for Forde Bert van Manen made the announcement today at Jimboomba alongside members of the community and representatives from the City of Logan and Scenic Rim Regional Council.

Mr Buchholz said the funding would be directed towards upgrades which would improve safety and travel times through upgrades to the Mt Lindesay Highway.

“The volume of traffic on the highway is increasing and it’s only set to get busier as the population booms through housing developments at Flagstone, Yarrabilba and Beaudesert plus increasing employment opportunities through development at Bromelton.

“We are listening to the community and pitching in $10 million to get the ball rolling on critical upgrades.

“I commend the community on its perseverance and passion in lobbying for funding and I will be discussing upgrades with my State colleagues as a matter of priority.”

Mr van Manen said residents in the western suburbs of his electorate had identified upgrading the Mount Lindesay Highway as a top priority.

“I am very pleased a re-elected Coalition Government will be able to address a number of concerning safety and congestion issues with $10 million funding,” Mr van Manen said.

“The Mount Lindesay is getting quite busy with the residential growth between Park Ridge and Jimboomba, and these safety improvements will make a big difference to those people commuting between Brisbane and Beaudesert.”

Mr Chester said he would be seeking a matching contribution to upgrade the Mt Lindesay Highway from the Queensland Government.

“The Coalition is committed to making local roads safer and we have directed record funding into the Roads to Recovery and Black Spot programmes because by building better roads we can change lives and save lives,” Mr Chester said.

“Upgrades to this stretch of road are critical in order to relieve growing congestion and address safety issues.

“It’s now vital that the Queensland Government matches our contribution to provide a total funding pool of $20 million which will enable upgrades that are consistent with local priorities to get underway.

“There were 1275 road deaths in Australia in the 12 months to May 2016. This is far too many and we must continue the campaign to make our roads safer for motorists, cyclists and pedestrians.”