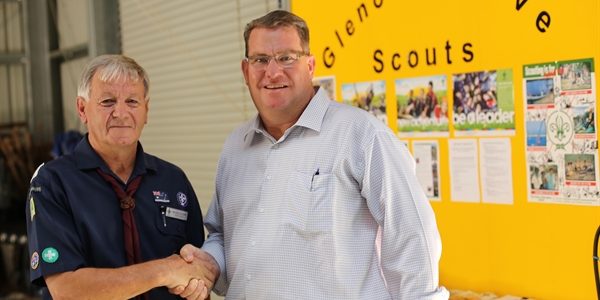 THE Glenore Grove Scout Group will be able to make more room for activities and new members after securing $19,377 in Commonwealth funding towards a six-metre extension to the group’s Scout Den.

The extension, which Federal Member for Wright Scott Buchholz helped get Commonwealth funding towards, will benefit the group’s 47 members and their families and also boost the group’s capacity to welcome new members.

As well as building an extension, the group plans to build awnings over the den entries and exits, upgrade inside and outside lighting and install extra solar panels.

“The work the Glenore Grove Scout Group does in bringing kids together and learn new skills is an asset to the community, and through this grant they’ll be able to strengthen their capacity so they can keep offering such a great service,” he said.

“I congratulate the group on securing this funding and I’m proud to be part of a government which supports the work of the Scouts.”

“This is a massive boost for Glenore Grove –we’ve been struggling along, with many of those who are involved with this group still coming to grips with the consequences of the Lockyer Valley floods,” he said.

“It’s been hard all round – hard to recruit, hard to get leaders, hard to get moving, so when you get a boost from the outside like this it’s a real boost because it just shows our efforts have been recognised by people outside our group.”

The $45,364 project, which the group will also chip in some of their own money and a grant from the Gambling Community Benefit Fund towards, is expected to get under way in the next six to eight weeks.