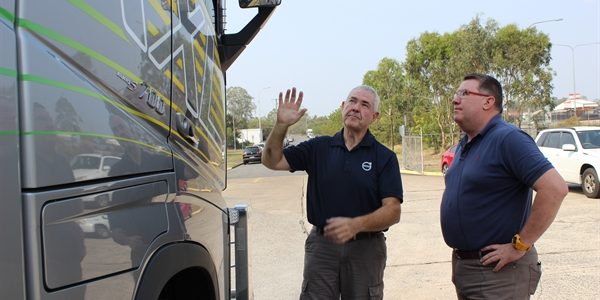 Assistant Minister for Road Safety and Freight Transport Scott Buchholz has added another few lines to his Work Diary after taking a FH Volvo XXL Cab for a run through South-East Queensland.

Mr Buchholz, who recently also took a Mercedes-Benz Actros for a drive through Dandenong, was pulling a B Double combination behind the FH Series.

“It’s important for me to keep my skills and Work Diary current and I thank Volvo for the opportunity to use one of their FH trucks,” Mr Buchholz said.

“I had 25 years in transport before entering parliament and opportunities like this help me keep in touch with the industry.

“It was also great to experience the Toowoomba Second Range Crossing from behind the wheel of a truck. It’s been a great addition to Australia’s land transport infrastructure, which was driven by the Coalition Government.

“By maintaining the skills I gained during that time I can identify with, and better understand, the issues that stakeholders raise with me,” Mr Buchholz said.

The Assistant Minister also believes the high standard of new trucks will attract a new breed of professional drivers.

“Significant advancements in safety and technological features make driving them a terrific experience that I believe will be a drawcard to attract new people to the transport industry,” Mr Buchholz said.

“At the moment the average truck driver is a man in his mid-50s so it’s imperative that we do what we can to get younger people from all backgrounds into the industry.

“Like many other industries previously seen as the domain of blokes, truck driving is becoming more professional and offers a great career to anyone prepared to have a go,” Mr Buchholz said.