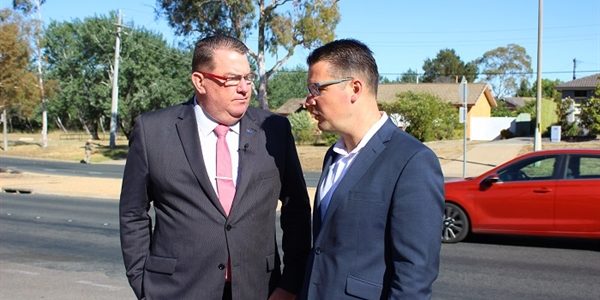 The safety of commuters and pedestrians at a road “black spot” in the Australian Capital Territory has been prioritised with funding from the Federal Liberal and Nationals Government.

Deputy Prime Minister and Minister for Infrastructure, Transport and Regional Development Michael McCormack said today’s announcement of $768,400 delivered under the Black Spot Program’s 2019-20 funding round would improve the safety of Mason Drive.

“This investment is part of the Federal Government’s commitment to building safer roads right across the nation and getting commuters home to their families sooner and safer no matter where they live.”

“The Black Spot Program targets road locations where crashes are occurring, improving safety by funding measures such as traffic signals and roundabouts at these dangerous locations,” Mr Buchholz said.

“The two new Black Spot projects being funded in the ACT, including an announcement on upgrades to Southern Cross Drive earlier this year, are an important contribution towards reducing the national road toll.

“As a south-side local, I have a particular understanding of just how important these safety upgrades to Mawson Drive are,” Senator Seselja said.

“The particular stretch of road we’re focussing on can be difficult to navigate as both a motorist and a pedestrian after a quick run to the shops.”

“The Bureau of Infrastructure, Transport and Regional Economics has found that, on average, Black Spot projects reduce the number of crashes causing death and injury by 30 per cent.”

“I’m proud the Liberal and Nationals Government is able to deliver a record spend on Black Spots projects in the ACT this year.”

For more information on the Australian Government’s Black Spot Program, or to nominate a black spot, visit http://investment.infrastructure.gov.au/funding/blackspots.