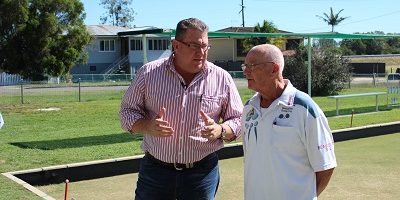 Scott Buchholz, the Member for Wright, has announced the Morrison Liberal National Government is investing in Beaudesert’s community infrastructure, with $14,556 provided to the Beaudesert Bowls Club to improve shade structures for the bowling greens and surrounding seating areas.

“The Liberal National Government understands how important community hubs such as the Beaudesert Bowls Club are. Organisations like this play an important role in enabling locals to be active in the community,” Mr Buchholz said

“Bowls is an iconic Australian sport. It’s not just for older Australians. There’s a diverse range of people playing bowls now. I’m proud that the Morrison Government is encouraging participation by funding these upgrades at the Beaudesert Bowls Club.

“The new shading will make day games more comfortable and enjoyable, particularly in summer. We’re creating a more user-friendly facility that will encourage more players and spectators to join in,” Mr Buchholz said.

Scott Buchholz said the Beaudesert Bowls Club was an important community hub for many across the district and the benefits of the Morrison Government’s investment in the facility will be a boost for the entire community.

“Thanks to a stronger economy, we as a Government can provide more assistance to clubs and help with much-needed upgrades. By providing better facilities, more people can get involved and that brings the community together,” Mr Buchholz said.