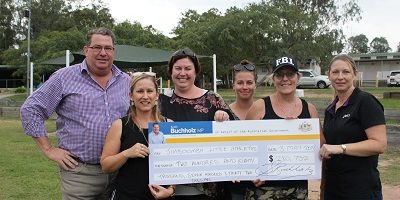 Scott Buchholz, the Member for Wright, has announced the Morrison Liberal National Government is investing in Jimboomba’s local sporting infrastructure, with $422,174 provided to upgrade facilities at the Netball Association and Little Athletics Association.

Representatives, players and supporters of the Jimboomba Little Athletics Association joined Scott Buchholz for the announcement.

“The Liberal National Government understands how important community sporting facilities are to locals. Without grassroots organisations and their facilities, fewer locals can have the opportunity to be active and get involved in community sports,” Mr Buchholz said

“That’s why the Liberal National Government is committed to investing in local sporting facilities such as the Jimboomba Netball Association and Little Athletics.

“We’re providing $141,442 to improve lighting for the local netball precinct. This will ensure the club can make better use of the courts for night training and games.

“The Little Athletics Association will receive $280,732 in order to upgrade the running track and make improvements to the grandstand,” Mr Buchholz said.

Scott Buchholz said sport played an important role for many across the region and the benefits of the Liberal National Government’s investment in these Jimboomba facilities will be a boost for the entire community.

“Thanks to a stronger economy, we can assist clubs with upgrades and expansions. This means more people can get involved, get active, and get together as a community,” Mr Buchholz said.