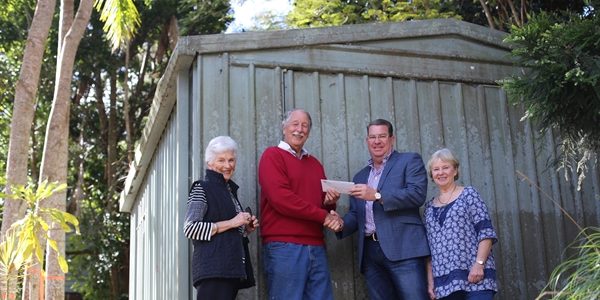 FEDERAL Member for Wright Scott Buchholz has planted seeds of joy among Tamborine Mountain Garden Club members by announcing $6330 for a shed extension.

The club will use the Commonwealth funding to double the size of the shed, which it uses to store equipment and signage at the Tamborine Mountain Botanic Gardens.

The $12,660 extension – which the group will also pitch in $6330 for – will help support the annual Springtime on the Mountain festival, which is the main fundraiser for the gardens.

“Through this grant they’ll be able to strengthen their capacity to keep running such a great Springtime on the Mountain festival and maintain the terrific condition of the gardens.”

“These gardens and the festival have been going for about 33 years and it’s entirely community-driven,” he said.

“Over time the festival has doubled in size and, as the festival has grown, we’ve needed more space – through this grant we’ll be able to double the size of our shed, which will make a major difference.”

Work will get under way to build a retaining wall for the shed extension in the coming weeks.

Springtime on the Mountain runs from September 23 to September 25, 2016.