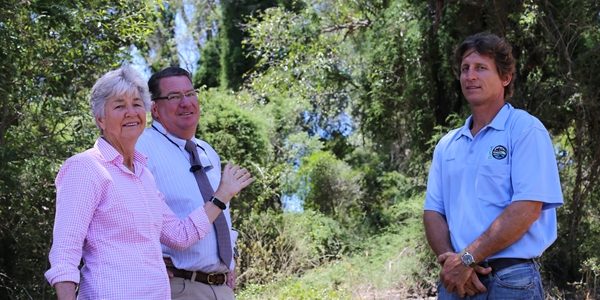 LANDHOLDERS, jobseekers and the environment will benefit from federally funded Brigalow revegetation at Purga Creek and Reynolds Creek in the Fassifern this year.

Wright MP Scott Buchholz announced the federal government had granted $183,181 through its 20 Million Trees program to plant more than 16,000 locally sourced trees across the two projects.

The federal government has also allocated a Green Army team to work on each site with Boonah and District Landcare, which secured the funding.

Landcare will work with 10 landholders across Purga Creek and Reynolds Creek to clear weeds, mostly cat’s claw creeper and asparagus fern, and plant Brigalow species to connect what remains of Brigalow scrub patches at the sites.

Wright MP Scott Buchholz applauded Boonah and District Landcare for getting alongside landholders to help improve the environment.

“I’m so glad the federal government can get behind such a beneficial initiative and help Boonah and District Landcare members continue the important work they do in our region,” he said.

“This is a worthwhile investment in our environment and also in our young jobseekers set to get on board through the Green Army, and I look forward to seeing the progress made at these sites.”

Thomas Bell from Boonah and District Landcare said the projects were a win for the region.

“We’ll help landholders with weed management issues, fire control and to an extent grazing pressure and also connect landholders together to preserve and grow Brigalow,” he said.

“Brigalow is not protected so we must work with the landholders to ensure connectivity for wildlife and reduce salinity in the catchment.”