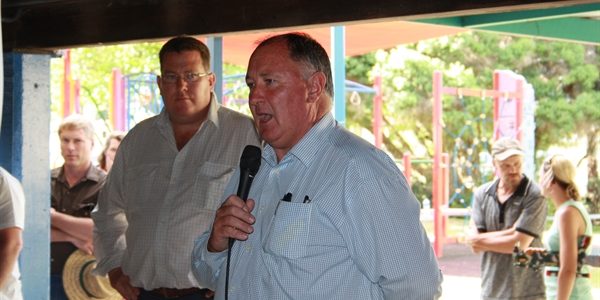 Mr BUCHHOLZ (Wright) (19:45): I rise to regretfully advise the House of the tragic and sudden passing of a mayor whose shire is completely engulfed within my electorate of Wright. I speak of the tragic and sudden passing of Mayor Steve Jones AM. Steve's time in this place has been cut short by many years. He was a man of only 54 years old, who had served as a councillor since 1997, when he was first elected. After amalgamations, he took on the mayor's role in the year 2004.

This man's passing is a great loss to not only the shire but the region, my electorate and the state. No-one will ever forget the Lockyer Valley Grantham floods. Mayor Jones played an enormous role in rebuilding that community. It was for that colossal effort that he was awarded his Australian medal. His funeral is tomorrow at 10 o'clock in the Lockyer Valley, in Gatton. I would suggest that it will be an enormous function.

For his wife, Ann, it must be just a terrible burden on her. To lose someone who has been chronically ill is something that you can prepare your mind for, but, when your life partner, your best friend, gets up of a morning and goes to work and just never comes home, it is a shock. As I said in my opening comments, he was of an age when this should not have happened. He died on the job. He was conducting a meeting with a number of other mayors—the Ipswich mayor and the Somerset mayor—in the Ipswich mayor's chamber. From the reports in the press, he slumped in the chair and never regained consciousness. He was transported to the Ipswich Hospital and then from Ipswich through to the PA in Brisbane.

I will always remember fondly some advice he gave me. He was known in the shire as Jonesy. That gives you a bit of an insight as to the fondness that everyone had for him. Jonesy gave this advice to me when I rang him once when the state politicians' wages had been increased—in Queensland, the mayors' wages are linked to state backbenchers' salaries. They had, through an independent tribunal, had an increase in wages and, subsequently, his went up and he was taking some negative traffic about it, as all politicians do when there is a pay rise. I rang him. I said, 'How are you holding up?' He said to me, 'Scotty, it doesn't matter what a politician gets paid. If we got paid a pushbike and a chook sandwich, half the shire would want you to give the chook sandwich back.' And he was right. He said, 'So never enter into a debate about politicians' wages.'

He was a mayor who was well liked by his councillors, a very small and boutique council. He also had a passion for the youth of the electorate. He had a very aggressive Lockyer Valley Regional Youth Council. He and the deputy mayor, Tanya Milligan, would often bring them to Canberra to give them exposure to federal politics and get them involved. He believed that the strength of the shire was in trying to retain the youth, to keep them.

I also remember a speech that he gave to a mob of developers up on the north coast, in his capacity when he was part of the regional council of mayors. All the mayors were vying for these developers to come to their shires and invest money. Jonesy's iconic speech was: 'Don't you bastards think about coming anywhere near my electorate. It's a rural electorate, and our job is to be the salad bowl for the world.' He had a great affiliation with regional Australia. He will be sorely missed by his wife, Ann; his boys, James, Dale and Brandon; their partners; and his grandchildren. Vale to you, Jonesy. Vale, Steve Jones AM.