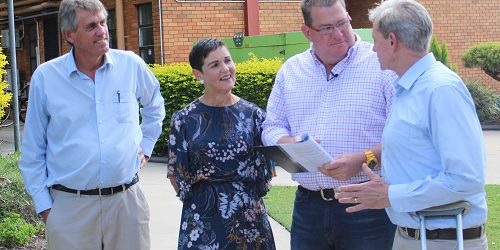 Scott Buchholz, the Member for Wright, has secured a big win for agricultural producers in the Lockyer Valley by delivering a $2.5 million investment toward the Central Lockyer Groundwater Irrigation Modernisation Project.

Mr Buchholz said he’s been working closely with local farmers on the issue, which has been an ongoing concern for many.

“I have fought with local farmers to secure this funding. I’m proud our Liberal National Government is investing in this project that will improve on-farm water security for the Central Lockyer Valley. The project will be co-funded by Seqwater,” Mr Buchholz said.

“This will be an important project for growers in the Central Lockyer Valley. It will allow them to continue to grow the world-class produce that has resulted in the region becoming famously known as the nations “salad bow”.

“Water security is a vital issue for the long-term viability of our farmers. This announcement will enable them to plan for the future with confidence and continue to provide local employment opportunities, particularly for young people,” Mr Buchholz said.

“The Liberal National Government is delivering the local water infrastructure that our communities want, expect and deserve. We can afford to invest in local projects like this because we’ve managed the budget responsibly.

“Irrigated agriculture is a major economic driver and water security projects such as this are essential for the region.”

“This is the news hundreds of growers in the region have been waiting for. This project fixes an issue that has been impacting us for decades. We thank Scott for the work he’s done to secure the $2.5 million investment,” Mr van der Est said.

“We’ve been working with Scott on water security and efficiency. He understands the problem and how important this project is for the future of the Central Lockyer Region.

“His support was instrumental in achieving this successful outcome for the project, and we look forward to Scott seeing this through to completion,” Mr Van der Est said.

The Federal Liberal National Government is investing in the project and Seqwater will be responsible for managing its delivery.