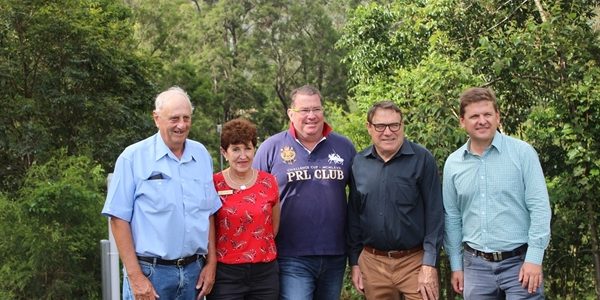 Improved sewerage infrastructure at the Canungra Showgrounds will boost tourism and remove risks to the local water supply, following the installation of new sewer pump stations.

Federal Member for Wright Scott Buchholz, who attended the opening, said the entire community will benefit from the improvements as Canungra Showgrounds will stage a range of events each year.

“Canungra is a gorgeous town, in the heart of the stunning Lamington National Park area. People come to this region from all over for the natural beauty, the rodeo, annual show and vintage car and bike shows held at the Showgrounds, throughout the year.” Mr Buchholz said.

“By upgrading these facilities, we’re providing capacity in the area to increase tourism to grow the economy.

“The newly improved amenities at the campgrounds will cater for the increase in numbers of visitors to Canungra and all the flow-on benefits to small businesses that it brings,” Mr Buchholz said.

State Member for Scenic Rim, Jon Krause thanked Scott Buchholz for delivering and said the project has removed a potential threat of spillage into Canungra Creek.

“The huge growth in visitors to the region did put pressure on the old septic system – this investment addresses that issue and builds for the future.”

“I want to thank Scott Buchholz for delivering the highly needed infrastructure for the Canungra community,” Mr Krause said.

President of the Canungra Sports & Recreation Reserve, Wayne Reiser said the support of Scott Buchholz and the Morrison Government was integral.

“Without this funding, we would have never got this project of the ground. People can come here, stay longer and it is going to benefit our community a lot.

“This place will grow in the next few years, it definitely will have a positive flow-on effect for the local economy,” Mr Reiser said.

The project was jointly funded with the Federal Liberal National Government investing $259,500, Seqwater $100,000 and the Canungra Sports and Recreation Reserve Grounds $159,500.

The Federal Liberal National Government contribution is funded under its Building Better Regions Fund. This $841 million investment is designed to create jobs, drive economic growth and build stronger regional communities into the future.