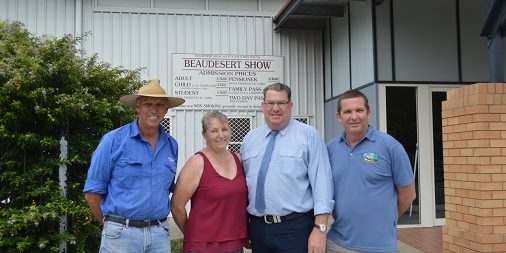 “As the local member, it gives me great pride to see investment flowing to the Beaudesert community.

“The Showgrounds are an important community asset, and thanks to the Liberal National Government’s sensible management of the Budget, we’re able to invest into the community.

“This investment enables us to fast-track several major infrastructure projects within the Showgrounds. These include restorations to the roof of the historical grandstand and building more permanent shade structures around the grounds – along with other projects as well.

“The Beaudesert Show Grounds are privately owned by the Society. These Community Development Grants ensure that we have the ability to build and maintain community infrastructure,” Mrs McFarlane said.

Scott Buchholz said the Showgrounds are home to great events, including the Beaudesert Show, Campdraft, Lifeline fundraising events, and many more.