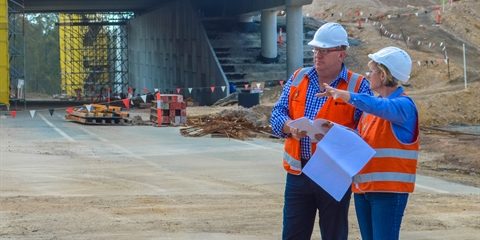 Federal Member for Wright, Scott Buchholz has visited two U-turn facilities where work has commenced on improving safety at the Warrego Highway intersection of the new Toowoomba Second Range Crossing at Helidon Spa.

Scott Buchholz said the new U-turn facilities will significantly reduce the crash risk at the intersection and allow safer movements for local residents of Helidon Spa and Postmans Ridge onto the Toowoomba Second Range Crossing.

“It was a fantastic opportunity to see the works underway, the shear mega scale of the project and the construction effort by the contractor Nexus Infrastructure,” Mr Buchholz said.

The new U-turn facilities are all about providing a safe alternative for drivers either side of the existing intersection to maintain access to Postmans Ridge Road and Twidales Road,

“I thank local residents for their patience during these works and acknowledge the hard work of the contractor Nexus Infrastructure, the Department of Transport and Main Roads and the local workers who are building the second range crossing.

Mr Buchholz said the Toowoomba Second Range Crossing is a significant investment in the Lockyer Valley region’s future with a Federal Government contribution of $1.137 billion

“This project is being delivered at an indicative total cost of $1.606 billion, including an Australian Government contribution of $1.137 billion”.