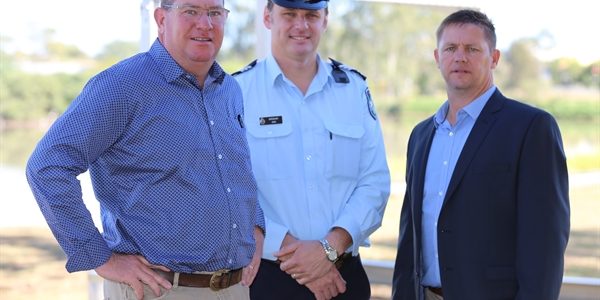 Federal Member for Wright Scott Buchholz and Lockyer Valley Deputy Mayor Jason Cook on Thursday, June 9 announced $17,000 under round two of the Coalition’s Safer Streets program for the equipment.

The Lockyer Valley Regional Council will receive the money to install the cameras, which have been welcomed by Gatton police as a positive for tackling crime.

Council identified the need for CCTV in the popular Lake Apex Park because of vandalism and destruction of public property.

At Lake Apex Park, vandals have damaged signs designed and funded by the community and done graffiti and structural damage on picnic shelters and other public structures.

Also, vandals have targeted trees in the park, with 70 per cent of trees planted by the community in 2014 being pulled out, destroyed or stolen and steel posts surrounding the plants being stolen.

Mr Buchholz said getting the CCTV cameras was a boost for safety locally.

“Only safe communities can be strong and prosperous, and the best way to tackle crime and anti-social behaviour is to prevent it from happening,” he said.

“I congratulate the council on being successful in getting Commonwealth funding for this project and I thank them for identifying Lake Apex Park for CCTV cameras.”